“Re-Animator The Musical” is a Scream: Now-June 3 @ Hayworth Theatre 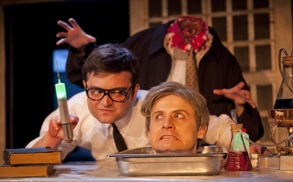 “Re-Animator The Musical” is a far cry from your typical theater-going experience.
(Credit: Thomas Hargis)

It was disgusting, it was morbid and it was perhaps even a bit insensitive. They left the stage a mess, and almost made me want to vomit. The show was in your face, out of control –and possibly the most fun you can have at a theater performance anywhere in Los Angeles today.

The goofy, gross-out comedy afforded by the Hayworth Theatre’s production of “Re-Animator The Musical” is a refreshingly lighthearted delve into the world of mad scientists, murder and of course, reanimation. Executed by a standout cast and backed by a skilled technical crew, “Re-Animator” is as impressive as it is hilarious.

The most obvious attraction in this performance is the subject matter. This dark comedy about a crazed medical school student cannot be fully appreciated without a taste for gruesome humor. The script calls for severed heads, a flattened cat and internal organs that take on a life of their own. Fake blood squirts through the theater, and the audience members in the front rows must duck under plastic to shield themselves from airborne bodily fluid.

Even though the show is written to be an outrageous and light-hearted comedy, the message is made all the more clear by a cast that seems to truly know and enjoy the characters that they are portraying. Graham Skipper is particularly notable in his role as Herbert West, the crazed student that seeks to become a master of death. Walking the fine line between an insane murderer and a medical genius, Skipper creates a character that is both understandably quirky and unimaginably insane.

Rachel Avery and Chris McKenna display an evident sense of chemistry in their roles as the show’s helpless protagonists. They display impressive vocals and a distinct range of emotion that creates a sense of normalcy amidst a show packed with chaos. Yet despite the truly eye catching performances of the leads in this show, fair credit is due to the outstanding chorus that completes this musical both visually and vocally.

The chorus is incredible, with tight dance numbers and distinct vocal talent. The pieces written for the chorus in this show are difficult numbers requiring a great deal of range and control. Easily executed by these talented actors, the show is made complete by ancillary characters that can oftentimes steal the show. Certain chorus members disguised as janitors or walking corpses make strong character choices that serve to stand out on stage. They are the unmentioned element that transforms this show from a comical stage performance, to a carefully crafted musical.

If you’re on the fence about seeing “Re-Animator,” you should drop your concerns and just go. It’s really an incredible show. More importantly however, you should go quickly because “Re-Animator” will not be in Los Angeles for long. Already scheduled for summer performances in New York and Edinburgh, “Re-Animator” is only in town for a few more weeks. Show up in costume for the Saturday evening show and join the dedicated fan base of horror geeks that keep coming back for the good time, the good show, the singing sensations, and most importantly, the severed heads.

“Re-Animator The Musical” is running now through June 3 at the Hayworth Theatre, 2511 Wilshire Blvd., Los Angeles; tickets start at $35.