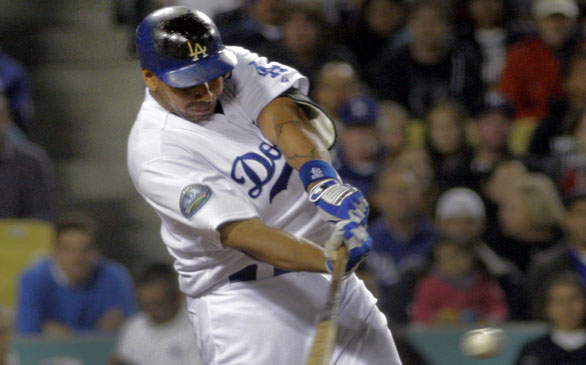 A.J. Ellis has been one of the most improved Dodger players thus far this year.
(Credit: Lawrence K. Ho/Los Angeles Times/MCT)

In a season defined by the improbable and unexpected contributions of Dodger bench players, the most heartening story may be that of A.J. Ellis. The 31-year-old catcher has spent the last four seasons playing second or third fiddle to the starters. He was the guy that got shuffled to and from the minors whenever one of the starting catchers was hurt, or the Dodgers needed to make room on the roster. It seemed that whenever his name was brought up as a possible everyday prospect, it was dismissed in the same breath.

The usual reasoning was that he couldn’t hit with consistency, so when it was unofficially announced over the spring that Ellis was the main candidate for the starting position, it was a bit worrisome; it seemed as if Ellis had already resigned himself to mediocrity.

But then something curious happened. A.J. Ellis started playing really well and putting up solid numbers. His .317 average, 23 RBIs and five homeruns make him the second biggest offensive threat behind Andre Ethier, with Matt Kemp out of the lineup. He’s been the personal touch on a couple of walk-off wins this year. It was Ellis who plunked the game-ending three-run homer that would finalize a 6-3 victory over the Houston Astros last Saturday, May 26.

Ask manager Don Mattingly to explain the remarkable facts: “He's worked and worked and worked on his swing. I can't even tell you the amount of hours this guy puts in. A couple years ago, he was getting called up, [and] he would just wear you out in the cage – and he's continued to work. That's why I say it's such a good story."

It’s a story that involved Ellis taking a stand for himself at the end of last season by telling Mattingly that he wanted to be the “everyday guy.” Ellis explains, “I thought I was ready, but first there is God’s timing and then there’s the organization’s timing.”

As for his impressive recent achievements at the plate, he says, “My hitting coaches deserve a ton of credit. I’m just trying to be the same guy every day.”

Ellis has been no slouch behind the plate either, throwing out nearly half of all would-be base stealers.

“The whole package has been great [with Ellis],” says Mattingly.

At long last, after nearly 10 years in the organization, A.J. Ellis can rightfully stake claim to the title “everyday guy.”