Michael Alan Nelson: The Man Behind the Comics 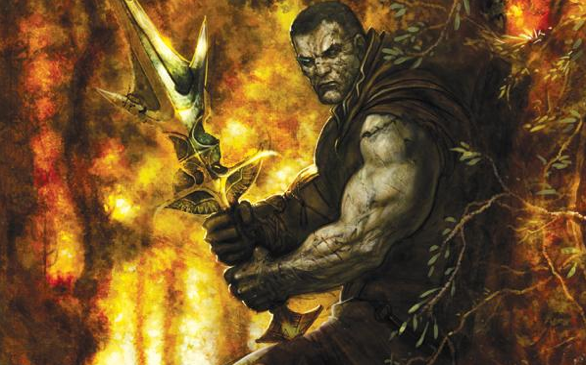 Comic book writer Michael Alan Nelson has scripted dozens of projects for BOOM! Studios, including 28 Days Later and Fall of Cthulhu. His latest, Valen the Outcast, follows an undead king on an epic quest to reclaim his soul from a necromancer.

Campus Circle: How did you get started in comics?
Michael Alan Nelson: I wrote a novel called Dingo and put it online for free. I posted a chapter a week, hoping to garner a readership and show people what I was capable of. Ross Richie [founder of BOOM! Studios] had come across the novel and really enjoyed it. He was just starting BOOM! and asked me to write something for the first Zombie Tales anthology.

CC: Do you think that kind of outside-the-box approach is necessary to break into the comic book industry these days?
MAN: I think good writing is what’s necessary to break in. You can have the coolest idea in the world and the neatest way to get it in front of people, but at the end of the day, if your story is awful, no one will care. That said, there is usually a bit of luck involved. If you look at self-publishing as a way to promote yourself and get your work in front of people, it’s the way to go. It not only garners you a readership, but it also shows publishers that you can tell a story and know how to finish a project.

CC: You’ve carved out a niche for yourself, predominately creating original stories from pre-existing properties. Is that something you enjoy?
MAN: There is always fun to be had playing in someone else’s sandbox, and with most pre-existing properties, the heavy lifting has already been done. You mainly just have to concentrate on the characters, and that’s what stories are all about anyway, but I would be lying if I said that it isn’t constricting at times. Because you’re writing someone else’s creation, you don’t have the freedom to go off in directions you might want to.

CC: You’ve written a lot in the horror genre. Even Valen, which isn’t strictly horror, has an undead protagonist. Is that a genre that has a special appeal to you?
MAN: I’ve always been fascinated by horror, though I’m not certain why. I used to be haunted by horrific nightmares as a kid, but even though those dreams frightened me, they also fascinated me. So I guess I gravitate toward horror because I’m still trying to exorcise those demons that haunted me all those years ago.

CC: What is it about zombies in particular that you enjoy writing about?
MAN: I don’t think I have an affinity for zombies as much as I do for apocalypses. It’s the small band of survivors that intrigues me. I love exploring the limits of what humanity is capable of when the thin veneer of civilization is stripped away.

CC: You’re going to be returning to prose fiction with your next project for Studio 407. What can you tell us about it?
MAN: Even though prose is a completely different animal than comics, the basic approach to storytelling is consistent no matter which medium I’m working in. At its core, the story is about a man named Danny Quick who is seeking redemption by helping others. Pretty simple, right? But throw in divine weapons, jealous gods, and a centuries-old friend-turned-nemesis, and things don’t remain simple for very long.

CC: Any final sage advice for aspiring comic book writers?
MAN: Don’t quit your day job. That’s not a slight against your talent or desires, but a warning that the life of a freelancer isn’t nearly as romantic as you might think. By all means, write comics, try to break in and get published, but when you are finally published, don’t be in a hurry to tell your boss to swallow a bucket of bees. You may need to eat those bees yourself one day.