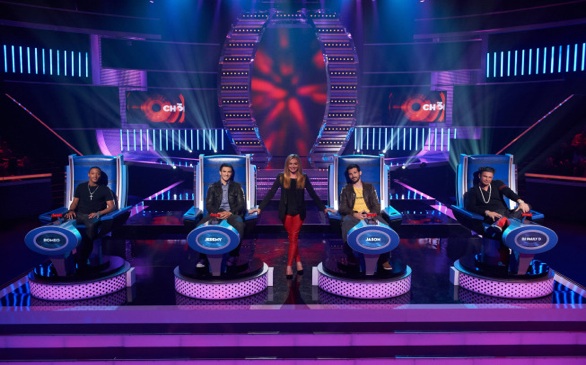 While summer used to be synonymous with re-runs, that isn’t the case anymore. This season’s TV line-up promises exciting new shows for those lazy summer nights.

“Duets” (Premiered May 24, 8 p.m., ABC)
Although the season is already a little under way, it isn’t too late to get wrapped up in another singing competition! The show takes the idea of “mentor” to another level, as the judges – “American Idol” alum Kelly Clarkson, John Legend, Sugarland’s Jennifer Nettles and Robin Thicke – perform live with their two hand-picked partners every week. Tune in to see these superstars belt it out, if not to see an otherwise undiscovered talent attain a record deal with Hollywood Records.

“Breaking Pointe” (May 31, 8 p.m., CW)
Capitalizing on the success of Black Swan, cameras will follow the graceful movers and shakers at the ultra-competitive Ballet West Company in Salt Lake City.

“Take Me Out” (June 7, 8 p.m., FOX)
With the summer months being the most popular time to have a wedding or a short fling, it’s no wonder FOX is at the ready to capitalize on the need for romance with two dating shows back-to-back. Leading off is a fast-paced show based on a series already popular in Britain and Australia, with George Lopez hosting the matchmaking of 30 single women going through four rounds of speed-dating

“The Choice” (June 7, 9 p.m., FOX)
Cat Deeley is working overtime as she hosts this new dating show as well as seasoned favorite dancing competition, “So You Think You Can Dance.” “The Choice” is somewhat of a spin-off of “The Voice,” in which a panel of eligible celebrity bachelors (including actor Dean Cain, Rob Kardashian, “Jersey Shore’s” Mike “The Situation” Sorrentino and Joe Jonas) have their backs turned to a female contestant, relying only on her voice and the things she says to make a decision as to whether or not to pull their “love handle.” If more than one bachelor opts to spin around, they must persuade the lucky lady to choose them for a date. There is one episode slated for female celebrities and male contestants, which stars Carmen Electra and Sophie Monk.

“The Glass House” (June 18, 10 p.m., ABC)
CBS has threatened a lawsuit against ABC because they believe “The Glass House” is a rip-off of their “Big Brother.” However, while the fact that it is 14 people living together filmed around the clock, there is one major twist in “The Glass House” that brings it farther away from “Big Brother” and closer to something like a real-life “Sims”: Audiences will not only decide who ultimately wins the grand prize of $250,000, but they are allowed to vote for what the contestants do and wear, and even where they sleep!

“Anger Management” (June 28, 10 p.m., FX)
It looks like Charlie Sheen is taking a couple more pages out of his life a la “Two and a Half Men” (in which he played a character loosely based on himself) with this new FX series based on the Jack Nicholson/Adam Sandler movie of the same name. See: 1) His character’s name is Charlie (predictable), 2) His character has some anger issues (natch), and 3) his ex-wife Denise Richards will guest-star (typical).

“The Newsroom” (June 24, 10 p.m., HBO)
Providing some relief from a summer chock-full of reality TV comes a scripted show from the genius mind of Academy Award-winner and “The West Wing” creator Aaron Sorkin. Its premise is familiar Sorkin territory: a television show giving a behind-the-scenes look at television. The sure-to-be snappy dialogue will be set at fictional cable TV network ACN, with Jeff Daniels playing the anchor, and co-starring faces like Jane Fonda and Dev Patel.

“Trust Us With Your Life” (July 10, 9 p.m., ABC)
The all-too-serious and maybe a little morbid title of this TV show does not altogether match up with its comedic premise: Celebrities like Florence Henderson and Kelly Osbourne will describe interesting moments from their lives, and improvisers – many from “Whose Line Is It Anyway?” fame, including Wayne Brady and Colin Mochrie – will act out these moments from the information given.

“Married to Jonas” (August 19, 10 p.m., E!)
While his familial boy band the Jonas Brothers have been quiet, Kevin Jonas and his wife Danielle join the ever-growing list of celebrity couples to bring their love life to the cameras.