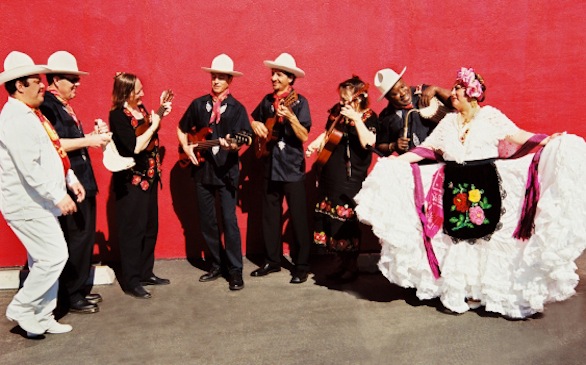 To celebrate their 15th anniversary, the band Conjunto Jardin is bringing a thrilling new production, titled "Fiesta Jarocha," to Hollywood on June 2.

All of the participating musicians partaking in this much-awaited event come from Veracruz, Mexico, a state near the Gulf that possesses so much beauty that it is hard to describe. The particular genre of music that derives from that locale, called son jarocho, is a blend of indigenous, African and Spanish musical entities put into one. It is arguably some of Mexico's best music.

"There is a growing interest in son jarocho and this style from Veracruz," Conjunto Jardin founder and singer Libby Hardin says of the show's significance to Los Angeles. "It is a wonderful opportunity for people to hear not only our brand of son jarocho, but also some of our other influences."

Conjunto Jardin is proud to be presenting such a show for the Los Angeles public. The group is an L.A.-based son jarocho ensemble, founded by sisters Libby and Cindy Harding, who have shined through the years performing their unique style of music.

"Our group will be playing music from Veracruz, and we have some special guests that will be with us to celebrate," an ecstatic Libby Harding says. "We are bringing different masters of son jarocho to the concert."

For "Fiesta Jarocha," Alberto de la Rosa and Don Fallo Figueroa & Son Candela are scheduled to perform, and are sure to entertain the public with their spectacular sounds. De la Rosa has an urban, upbeat tone, while Figueroa and his crew provide a contemporary and traditional feel.

"De la Rosa is just a phenomenal master of the style; he's been playing all his life and he is one of our teachers," Libby Harding points out. "Don Fallo is an arranger, composer and teacher of son jarocho. Son Candela are these young guys that he has been mentoring, and [they] are incredibly talented musicians."

On top of that, the Tierra Blanca Dance Company will perform a piece in the traditional zapateado dance style (flamenco-inspired percussive footwork). The group is well known for its brilliant performances, so their upcoming showcase is sure to ignite the crowd with energy --perhaps initiating an infectious dance segment.

Another talent scheduled to perform during the night's show is Veracruz's own bilingual MC Rafael Figueroa, a master decimista in the region’s 10-line poetry form. In between acts, look for a charismatic Figueroa to engage with the audience by performing some of his works.

Whether one is a fan of son jarocho or not, "Fiesta Jarocha" promises to deliver a good time full of lively music, marvelous pieces of dance, colorful costumes and a fabulous atmosphere.