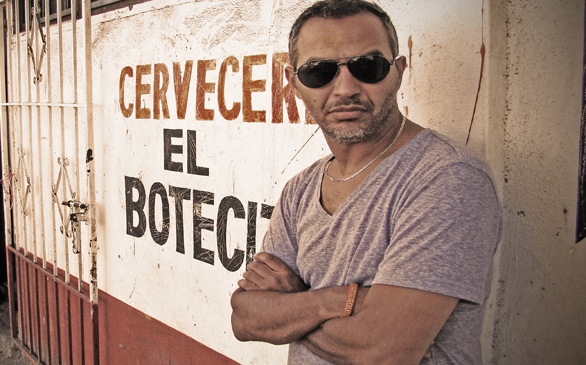 Sarazino is the brainchild of Lamine Fellah, a musician, songwriter and producer.
(Credit: Jacob Edgar/cumbancha.com/sarazino)

Sarazino is not your typical musical group: Its sounds defy a single genre, and the group derives from a diversity of cultural backgrounds.

The band, led by musician, songwriter and producer Lamine Fellah, tends to mix Afro-Latin reggae with hip hop, Colombia's popular cumbia and other Latin and African rhythms. Sarazino's most recent album, Everyday Salama, illustrates its passion for formulating one-of-a-kind musical combinations, which in this case has produced wonderful results.

"There is an importance in the rhythm through reggae," an energetic and charismatic Fellah says. "It is a mix of influences from all over the world, including Africa and Europe."

"It was challenging, but bridges were built," Fellah says, acknowledging the enormous efforts involved in coordinating so many collaborations. "It was an incredible charm doing this."

Fellah, who is fluent in four languages including English and French -- and who wants to learn Portuguese -- has now settled in the gorgeous South American nation of Ecuador, a place that he has proudly called home since 2003.

"This country has about 14 million living in it," Fellah says. "I like the people --and the food. It is just a marvelous and beautiful country."

Fellah was born in Algeria and has lived in Spain, Switzerland, Burundi, Burkina and Canada, and holds a degree in political science and economics from the University of Montreal. His passion for the music of different cultures is portrayed in Everyday Salama, Sarazino's second disc.

"This is a new musical proposal for the people," Fellah says. "We are happy to present this album because there was a lot of effort going into it, and we are sharing it with people."

One of the most enjoyable tracks is "Sigueme Dejalo" (Follow Me Leave It), produced with the collaboration of Luísa Maita, and it is completely cool from beginning to end.

"The vibe and flow is a touch of sensibility," Fellah says. "Luísa Maita placed her own lyrics into the song, which has a lot of groove, and is sensual [as well]."

"It talks about problems and positivism," Fellah comments. "Everyone goes through bad things in life, but despite that, we need to maintain a high profile and [keep] our spirits high."

Even in his spare time, Fellah can't seem to escape his musical career, since he performs a lot of works for other artists. However, when he does have down time, he loves traveling and visiting Ecuador's provinces and beaches.