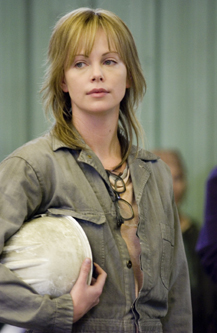 Untitled Document Following an Academy win and two-year absence from the big screen, Charlize Theron returns opposite Frances McDormand, Woody Harrelson and Sissy Spacek in North Country. Directed by Niki Caro (Whale Rider) and set in the hinterlands of Minnesota, the film is a fictional tale based on the real-life struggles and harassment that a group of female miners had to overcome when they crossed the occupational gender line in a rural community; and culminates in a courtroom battle for their rights that irrevocably changed their lives.

Theron explains what compelled her to tell the story. "It was real … it actually happened and it only happened very recently – this case was only settled in ’95. It’s incredibly naïve as a woman to sit in my circumstances never having to have dealt with anything like that and to think, ‘Wow, we’re all good, everything’s great,’ only to find out [later in life] that this doesn’t just happen in little rural communities, it happens everywhere."

When asked if she’d again go to the extremes she did in her Oscar-winning portrayal of female serial killer Eileen Wournos, Theron replies: "I think it would be incredibly selfish to think about going through what I went through with Monster ever again in my career. … But I love my drama! So when I read North Country I was all over it. I’m really influenced by directors, and I got really fortunate to stalk the director that I wanted to work with and then she gave me a job. That was really it."

Her role in Monster notwithstanding, it’s not lost on Theron that a thespian’s work is never done – and, according to the actress, she wouldn’t have it any other way. "There’s nothing else I really want to do. ... I think what’s so great about acting is the creative process – it’s a constant."

When asked if she has a fear of the "post-Oscar jinx" that has left more than a few Academy winners crestfallen by bad choices in roles, the laid-back South African cuts right to the chase. "It never felt like I could sit back on any one performance and say, ‘Well, I really fuckin’ nailed that one!’ Every time I watch [one of my past performances] I learn. I mean, I wasn’t classically trained so I learned on the job and I learn by making movies and so I fail [sometimes],"she admits without a scintilla of pretension. "When I watch my work I see where I’ve made mistakes, so the next time around I’m even more excited to go and not make those same mistakes – to challenge myself even more."

You’ve heard the story before: An actor wins an Academy statue and he or she goes paper-blind from the flurry of scripts that are redirected to his or her mailbox. According to Theron, however, she didn’t have to go down that road.

"I took this role a week before I won the Oscar – I would be stupid to say it wasn’t because of the (Oscar) noise. But I agreed before I actually won. Niki and I had dinner about a week before the Oscars and she finished my sentences, I finished hers, we were on a complete page – I fell in love with her. I was so inspired by her as a woman and I said, ‘Look, if you’ll have me, I’d love to do this.’ And I also did that with Aeon Flux. When I won the award I never even entertained any other offers," Theron points out and continues, "I haven’t read a script since Aeon Flux and North Country, in the last two years."

Theron adds, "Karyn Kusama and Niki are two filmmakers that I really wanted to work with – they felt like two projects that were day and night from each other. I liked the physical aspects of Aeon, I liked doing North Country with Niki, and so, it wasn’t like, ‘Now I’ve got an Oscar, what do I do now?’"

Oscar or not, Theron admits that she gains satisfaction from fighting for what she wants, especially her climb through the Hollywood ranks. "I think it would have been a real letdown if I’d showed up (in Los Angeles) and everybody kind of just gave me great parts, said ‘here, you’re fabulous, go on,’" she says. "You know, there’s something to be said that you went and accomplished something and, of course, something that I’m proud of."