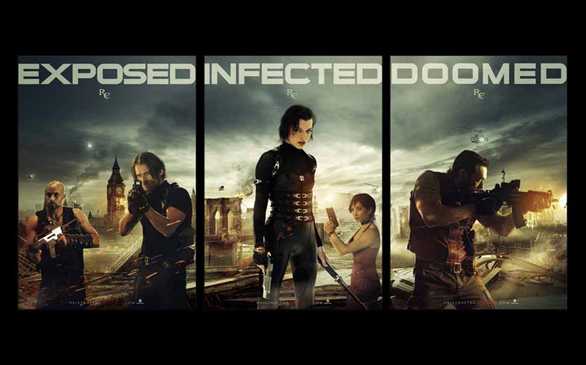 Resident Evil: Retribution, which hits theaters in September of this year, has been rather quiet on the promotion front since the teaser trailer was released in January. There has been nothing new, aside from an official Umbrella Corporation website, where videos of Alice crackle into view every few minutes, telling us not to trust Umbrella. Fans have been clamoring for new information, footage, or anything else that they can get their hands on.  Several days ago, 47 new concept posters leaked onto the internet, many of them featuring tag lines, such as "Revenge Is a Bitch" and "Fight Your Demons".

It would seem from these conceptual posters and the synopsis alike that the film is on a much more epic scale than that of the first four films.  Retribution's full theatrical trailer should be released within the month, and other promotional items, like pictures and posters, will most likely be released around the same time.

"The Umbrella Corporation’s deadly T-virus continues to ravage the Earth, transforming the global population into legions of the flesh eating Undead. The human race’s last and only hope, Alice (Milla Jovovich), awakens in the heart of Umbrella’s most clandestine operations facility and unveils more of her mysterious past as she delves further into the complex. Without a safe haven, Alice continues to hunt those responsible for the outbreak; a chase that takes her from Tokyo to New York, Washington, D.C. and Moscow, culminating in a mind-blowing revelation that will force her to rethink everything that she once thought to be true. Aided by newfound allies and familiar friends, Alice must fight to survive long enough to escape a hostile world on the brink of oblivion. The countdown has begun."

To view the rest of the 47 concept posters, click here

To find out more information about Resident Evil: Retribution, visit the official website at ResidentEvil-Movie.com

Resident Evil: Retribution will be released on September 14, 2012.