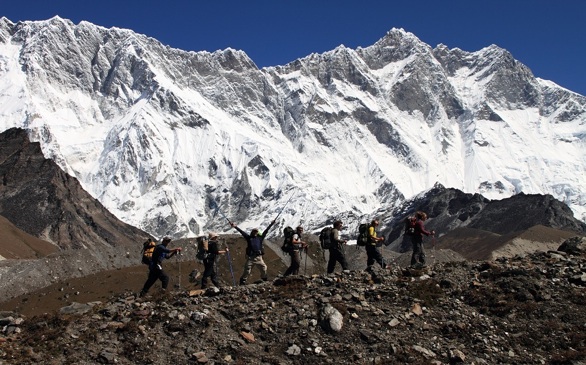 IWLS OFFERING CLASSES IN NEPAL
The International Wilderness Leadership School will once again be offering classes in Nepal this fall. The semester starts on September 15 with an 80-day class focusing on mountaineering, the Wilderness First Responder service project and whitewater rafting. The course will have students climbing among some of the tallest peaks in the world, exploring glaciated valleys and learning about the Sherpa culture. A 30-day mountaineering class begins the same day, while 24-day backpacking and whitewater classes begin on November 10. If you can’t wait until fall to get out in the wilderness, IWLS has a myriad of classes going on in Alaska and the Yukon now through mid-August. For more information, visit iwls.com.

ALNWICK CASTLE – THE REAL HOGWARTS
The name may not be familiar to you, but unless you’ve been living under a rock, you know at least a little bit about England’s Alnwick Castle since the approximately 900-year-old structure was used as the setting for the Hogwarts School of Witchcraft and Wizardry in the first two Harry Potter films. Now you can learn virtually everything else there is to know about Alnwick (pronounced “Annick”) thanks to Alnwick Castle, the new coffee table-style book by James McDonald, just released by publisher Frances Lincoln. Unlike many English castles, Alnwick is occupied; the Duke and Duchess of Northumberland currently reside there. They cooperated fully with McDonald for the book, allowing him to see not only the public rooms that are shown on tours, but also some of the private rooms as well. Among the 200 new photos are pictures of priceless artworks by the likes of Titian and Vecchio. The book also includes shared anecdotes, one of which is the story of how the chandelier in the castle’s ante-library came crashing down during a refurbishment. Of course, McDonald delves into centuries of history too; Oliver Cromwell imprisoned thousands of Scottish prisoners here more than 300 years before Harry took his first flying lesson just outside. For more information, visit franceslincoln.com.

CAVE ART
There once was a time when if someone asked you, “What, do you live in a cave?,” your answer probably would have been “Yes!” You can kind of get an idea of what life was like back then by flipping through Paul G. Bahn’s Cave Art – A Guide to the Decorated Ice Age Caves of Europe. In soft cover and newly revised and updated, Cave Art lists more than 50 sites, primarily located in France and Spain, and details important visitor information like restroom availability, difficulty of access and restrictions on photography. Bahn has pretty much thought of everything; he even tells you which are the best buses or trains to take to any given site. Much of the art in the caves is predictably primitive, but some, as revealed by photos here, is stunning considering its time of origin. Bahn relates any known history of each site too, like Gargas in France, where legend has it that a madman massacred 80 young women and then ate parts of them. For more information, visit franceslincoln.com.