The Zombie Apocalypse Has Begun! 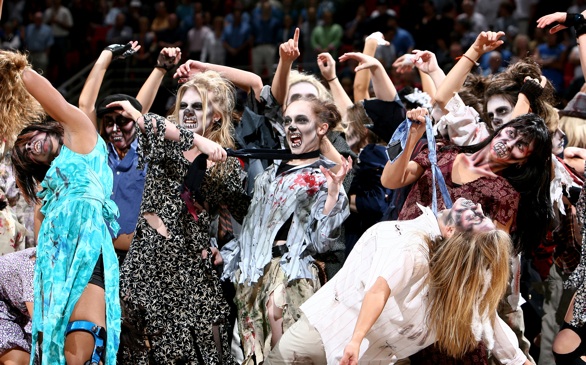 Grab your guns and remember to shoot for the head.
(Credit: Jacob Langston/Orlando Sentinel/MCT)

NOTE: Campus Circle does not endorse violence of any kind. This article was written in good fun, and by no means should you go out, buy a gun and start shooting people.

Well, it hasn’t technically begun, according to the Centers for Disease Control, who have denied the existence of actual zombies; however, the various cannibalistic occurrences that have taken place over the past month seem to indicate otherwise.

Sure, these may not be your typical moaning, bleeding, brain-dead zombies, but there is something strange about the sudden influx of people murdering and eating other people. It all began with the story of a nude man in Florida eating another man’s face. Not only that, he didn’t stop after being shot, so police had to shoot him several more times, finally ending in his death.

This is all in the wake of an apparent mysterious rash that broke out in several schools in Florida. These might all be coincidental, but it sure sounds like a zombie apocalypse to us. That’s why Campus Circle has decided to compile a list of basic rules to follow in the wake of an actual zombie outbreak.

1. Invest in guns and lots of ammunition.

Anyone that’s ever seen a zombie movie should know that you’re going to need guns and ammunition. That much is obvious.

If the movies are to be believed, you’ll want to aim for the head. Apparently, this is the only true way to kill the reanimated corpses for good.

Go to the nearest grocery store and buy yourself a ridiculous amount of canned food and jugs of water. It has to be canned because it’ll be the last food to expire. You can’t rely on things like meat or bread because it won’t last long enough. You’ll be looking for food with longevity, since you’ll most likely be in a boarded up house for the duration of the zombie apocalypse.

This may seem like common sense, but you’d be surprised how a fatigued feeling can affect your better judgment. Don’t think that just because it’s been quiet for a few hours that it’s safe to sleep. Make sure you are in some sort of secure area that is literally inaccessible to any outsiders, including zombies.

5. Keep your food and ammunition in a safe place.

You can’t leave your stuff just lying around anywhere. When the world is in the middle of an apocalypse, people will do anything to survive – including stealing your food, which brings us to our next rule…

Who knows what that guy you just became friends with has up his sleeve? Literally though, he could have been bitten on the arm, and you’d never know.

7. If you absolutely must have a companion, perform an inspection.

Yes, we know that you’re no doctor, but what if that guy really has been infected and he isn’t telling you? Don’t worry about the awkwardness of making him strip in front of you. The world is ending! This is your livelihood we’re talking about here, people.

8. If you happen to be stuck in a group situation, a la Dawn of the Dead, and someone seems infected, check them.

If someone starts twitching or grunting and moaning, that’s probably a bad sign unless they’ve been diagnosed with Tourette’s. Who cares if their boyfriend or girlfriend says they’re fine? If you know someone is infected, shoot him or her! Sorry, dude. That wedding ring on your fiancé’s finger does not mean that I’m not going to shoot her if she tries to eat my brain. Just saying.

If you stay in one place too long, you’re probably going to attract zombies at some point. They can smell you.

I mean, have you seen the Resident Evil movies? She knows what she’s doing. She’s resourceful, and she’s really good at killing zombies. It’s safe to say that you’d probably live if you stuck with her.

Oh, and one last thing…