The Force is Within Him: Ewan McGregor Remains in Critics’ Minds with Stay 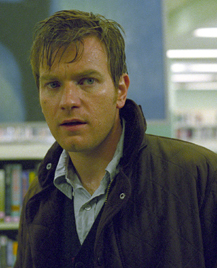 Since 1996, Scottish actor Ewan McGregor has been drawing critical acclaim for his unique and diverse performances on the silver screen. From Danny Boyle’s Trainspotting, the movie that first garnered the actor some attention here in the States, to Baz Luhrmann’s extravagant musical Moulin Rouge! in 2001, McGregor has quickly become one of those rare Hollywood A-listers who keeps both the public and the critics happy.

However, it wasn’t until McGregor followed in his uncle’s footsteps and starred in the Star Wars franchise (McGregor’s uncle, Dennis Lawson, played Wedge Antilles in the original trilogy) that the actor became a commercial success. And just like every Star Wars star before him, McGregor’s been working hard since landing the role of young Obi-Wan Kenobi to prove that he’s still that same brilliant actor critics loved in such lesser-known films as Shallow Grave, Brassed Off and Velvet Goldmine.

With Marc Forster’s mind-bending thriller Stay, McGregor shows off his wide acting range once again in the role of New York psychiatrist Sam Foster. The movie focuses on Sam’s urgent attempt to stop a secretive and unusual young patient (played by The Notebook’s Ryan Gosling) he inherits when the young man’s regular psychiatrist mysteriously takes ill, from carrying out a planned suicide on the eve of his 21st birthday. As Sam is drawn deeper into the web of the young man’s life – and then into the labyrinth of his subconscious – soon his own tightly held grip on the rational world begins to melt away. Faced with increasingly surreal encounters, Sam can no longer figure out what is real and what is happening only in his mind, nor where he begins and his newfound patient ends.

Despite starring in a variety of films that feature the award-winning actor playing everything from a junkie to a Jedi Master, the role of Sam Foster is nothing like McGregor has ever encountered before.

"I thought it was a remarkable script, but then Marc Forster took it to another level yet, creating this very intricate experience of a dream come to life," McGregor states. "It’s all very subtle and subliminal, and also spooky. On the one hand you have this very familiar world of New York that the story’s set in, but then there’s this sense of un-reality that grows and grows throughout the film and takes you somewhere else."

Similar to his role in the Star Wars series, McGregor spent a lot of time during Stay’s pre-production analyzing his character so that he could bring him to life. While during Episode III McGregor admits to steeping himself in the performances of Sir Alec Guinness, who originated the role of Obi-Wan Kenobi in 1977’s Episode IV – A New Hope ("It was my last shot at making it match up with his work," McGregor says. "For three weeks I had his scenes from the first three movies playing nonstop in my dressing room as inspiration"), with Stay, McGregor kept his focus narrowly honed in on what his character was going through minute by minute at the most basic emotional levels.

"One of the things I focused on is the role reversal that goes on between Sam and Henry," he explains. "Sam in a sense becomes the patient, and Henry (Gosling) almost becomes the doctor. Sam’s vulnerability is really revealed as he begins to see that his desperate need to help other people is also a need to help himself get over the mistakes he has made in the past. He begins to see that Henry isn’t the only one looking for redemption."

"Ewan plays Sam as a man to whom rationality means everything," notes Forster. "It’s the basis of how Sam operates, but then through Ewan’s performance you slowly see the deterioration of Sam and all that he believes in as he starts to become the thing that frightens him the most: delusional."

Nowhere does Sam’s vulnerability come more to the fore than in the scenes between Sam and his former-patient-turned-artist-girlfriend Lila, who he hopes to marry, played by The Ring’s Naomi Watts. For the 34-year-old actor, these scenes became touchstones of reality in a story that veers into mind-blowing directions.

"Naomi and I both wanted the relationship between Sam and Lila to be very authentic," McGregor notes. "It’s not the kind of thing where violins are always playing in the background. There is a real tension and real love between them."

Coming off of the sci-fi dud The Island and the Disney bomb Valiant, McGregor is hoping Stay will re-establish him as both a box office and critical heavyweight. Although the animated film Robots fared well at the box office earning over $128 million and Revenge of the Sith was a huge success, neither film will likely garner the actor any Academy Award nominations (although McGregor is well-deserving of one thanks to the final scene in Episode III between Obi-Wan and Anakin). The dark, emotional journey McGregor goes on in Stay could receive some attention from the Academy, although McGregor admits that the final Star Wars was one of his most satisfying experiences as an actor.

"Obi-Wan has much more to do in this film," he says about Episode III, "and George (Lucas) has written a story that takes the character where I always hoped he would go. Obi-Wan really loves Anakin, and he experiences a profound disappointment and sadness watching Anakin turn to the dark side. That was very interesting to play."

And while fans won’t see McGregor in any James Bond movies in the near future (blonde English actor Daniel Craig recently beat out McGregor, Hugh Jackman and Clive Owen for the coveted role of James Bond in 2006’s Casino Royale), the actor is keeping himself busy both onstage and on the silver screen. Currently McGregor is showing off his pipes once again, starring in the lead role of Sky Masterson in the Donmar Warehouse production of Guys and Dolls in London’s West End, and can next be seen in Scenes of a Sexual Nature alongside Aeon Flux co-star Sophie Okonedo. In the meantime, though, fans of McGregor’s stateside will either have to bring the sexy Scot home with them when Star Wars: Episode III – Revenge of the Sith premieres on DVD Nov. 1 or flock to their local theaters to see Stay.