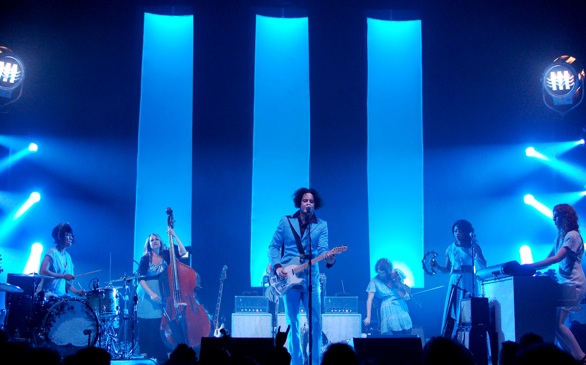 The atmosphere was flooded with blue lights and rapid strobes illuminating his album logo, and the show began with "Dead Leaves and the Dirty Ground." Interestingly, White had created a completely different set list than the prior night, when he also performed at the Wiltern, which featured an all-male band supporting him on stage.

Each night provided a uniquely satisfying experience for fans of his side project hits. Naturally, the focus was on Blunderbuss, and most of the songs White performed were straight off this release. A strong mixture of blues, country, folk jams and southern rock medleys blended seamlessly to create an unforgettable experience.

White’s relationship with the Los Angeles crowd was quickly established during "Love Interruption," which featured a duet performance with Grammy Award-winning artist Ruby Amanfu. The debut single exposed the vulnerable and personally revealing side of White’s lyrics, leaving the audience craving and lusting for more.

For the Racounters fans in attendance, massive crowd participation carried "Top Yourself" from start to finish, lifting that same momentum to higher limits as "Hotel Yorba" from the White Stripes followed after. The entire performance seemed timeless: White seamlessly evolved the feel of the early rock 'n' roll era into a modern show.

His humble nature was apparent, as he made it a priority to credit his supporting band at every interlude, introducing them individually to the crowd. The bassist, returning to her hometown, made her final appearance of the tour, expressing her unforgettable experience on the road as she prepared for maternity leave. White publicly praised her for her talents and contributions, rubbing her baby bump as the night continued.

A wide variety of crowd reactions alternated between songs, ranging from fast-paced hair flipping during high-energy tracks, to gentle swaying along with the acoustic blues. White’s ability to switch the musical direction between songs featured rapid guitar solos, distorted shredding and violent violins.

After 13 songs, White teased the audience with "Ball and Biscuit," leading to a small intermission that caused encore chants across the floor. The ambitious crowd seemed to ignite a passionate fire within White, who reappeared with a longer encore than he had performed the previous night.

Upon his return, his second single, "Sixteen Saltines," kicked off the 30-minute encore performance, which featured hits from all his previous monikers.

White asked the audience to participate on a few songs, asking them to sing “Are you steady now?” during "Steady As She Goes." Soon after, a loud thumping bass drum began the crowd favorite intro to "Seven Nation Army," which easily received the loudest ovation of the night. The momentum shifted as the 21-song set list came to an end with a jazzy blues rendition of "Goodnight Irene" by Lead Belly, closing the North American tour with a bang.