The Temper Trap is Back with a Darker, More Mature Sound 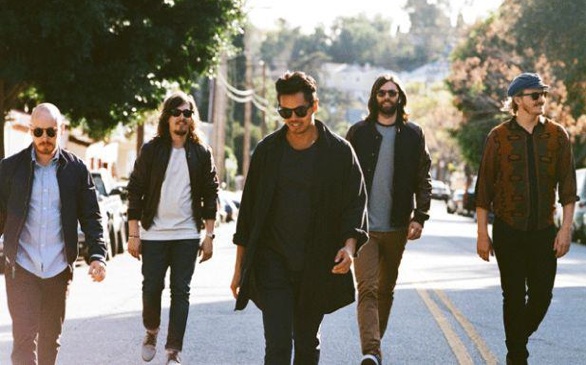 Australian indie rock band the Temper Trap soared to a level of worldwide recognition with its infectious hit “Sweet Disposition,” off the 2009 release, Conditions. The success of the track led to nearly a million album sales, as well as a series of sold-out shows throughout the U.K.

Now, after two years of touring, the five-piece is back with its sophomore self-titled L.P., recorded right here in L.A. The album is almost dichotomous: a mixture of up-tempo, poppy tracks, like their first single, “Need Your Love,” and gloomy ballads, such as the haunting “Rabbit Hole.”

Joseph Greer, who plays keyboards and guitar for the band, talks to Campus Circle about the new album, his musical influences and what he is most looking forward to about touring the world again.

CAMPUS CIRCLE: How has your sound evolved from the making of Conditions to The Temper Trap?
JOSEPH GREER: We acquired some new synthesizers, which were used quite a lot during the writing, and I think that influenced the kind of songs we wrote quite a lot. The other major difference was the songs written for Conditions were the result of years of writing, but with The Temper Trap, we only had about six months to write the album.

CC: What was the process of recording your new album like?
JG: We had a really good time working with Tony Hoffer who produced the album. We were in his studio, so he really knew how to pull sounds very easily, and he was just a great person to be in a creative space with, which made the whole process very exciting.

CC: How does your creative process work, from conceiving a song to actually recording it?
JG: A song usually starts with one of us bringing in a riff, and then usually we will work on it all together to try and make the skeleton of the song. Once that is done, Dougy [Mandagi, the lead vocalist] will go away and come up with the vocals and melody. When we have a demo of the song, it usually ends up changing over time, especially in pre-production, until we have something we all feel is ready to be recorded.

CC: What made you decide to go with “Need Your Love” as the lead single?
JG: We just thought it was a good starting point for people to hear some of the new elements we have on the new album.

CC: What will the next single be and why?
JG: “Trembling Hands” is the next single. This song is a favorite for all of us, and I think it tells a great story. I can't wait to see what everyone else thinks of it.

CC: How would you describe the sound/feel of the album?
JG: The lyrics are a bit darker on this album and there is also a lot more use of synthesizers. We feel like it was a step forward for us musically, and we definitely pushed ourselves as much as we could. We're all very happy with the result.

CC: What other bands/artists influenced you when working on the album?
JG: There wasn't anything we were all collectively listening to, but for me personally, I was listening to a lot of Queen, Arcade Fire and Nick Cave and the Bad Seeds.

CC: What made you decide to make this album self-titled?
JG: It's a kind of boring story, but basically between the five of us we couldn't decide on something we all liked, so we ended up just going with a self-titled album.

CC: What do you enjoy most about touring?
JG: Being able to experience so many different cultures, and especially being able to eat the food of the different places we go to, but most importantly getting to play our music for so many people.??

CC: What song is your favorite to perform live?
JG: “This Isn't Happiness” is really fun to play live. It has a great groove to it that really helps you get lost in the music.

Catch the Temper Trap when they play at the Hollywood Palladium in Los Angeles on June 15. For more information and to purchase tickets, click here.