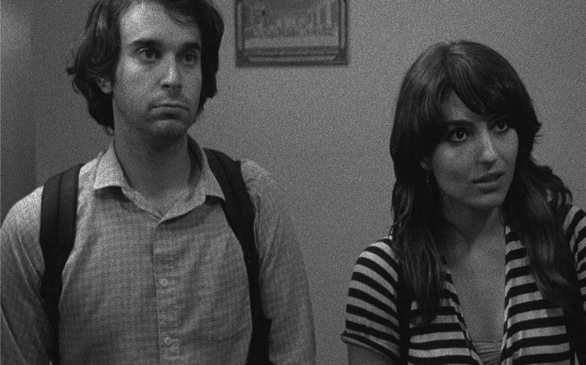 Chances are you know someone just like Colin or J.R., the main characters in The Color Wheel: mid-20s, good looking and whip-smart, yet dripping with low self-esteem because they don’t really know how to handle the life lessons that have been handed to them so far.

J.R. (Carlen Altman) aspires to be a TV anchorwoman. However, she hits a bump in the road when she is dumped by her boyfriend, who also happens to be her college journalism professor, a cad who had promised to help her start her career, but who instead sent her packing when he tired of the sex. J.R. enlists her brother Colin (Alex Ross Perry, who also directed and produced the film) to take a road trip with her to retrieve her property from her ex, and here’s where the fun begins.

J.R. and Colin ostensibly don’t get along, but their emotions are not displayed through cold indifference; rather, the pair indulges in a non-stop barrage of witty sniping that’s delivered without vitriol. This type of wordplay can easily drag a film down, but here it steals the show, as J.R., the pathetic pollyanna, and Colin, the hangdog realist, get exactly what their attitudes call for as the film progresses.

The film is both heartwarming and filled with extreme situations and funny moments –perhaps the most outrageous coming when the siblings are forced to kiss in front of a motel manager who says he only rents to married couples.

At film’s end, something shocking happens that completely changes the tenor of the film, while simultaneously reinforcing the notion that the pair has a long way to go before they’re capable of making prudent decisions. This revelatory moment also hints at why the pair behaves as they do.

The Color Wheel is presented in black and white, a film noir technique that mirrors the fact that the lives of Colin and J.R. are certainly devoid of anything bright or upbeat. Regardless of what you take away from The Color Wheel as far as meaning, one thing is undeniable: Perry is a filmmaker and actor to start following now.

The Color Wheel begins a weeklong run at the Downtown Independent on June 8, and will be released on DVD by Factory 25 this fall.