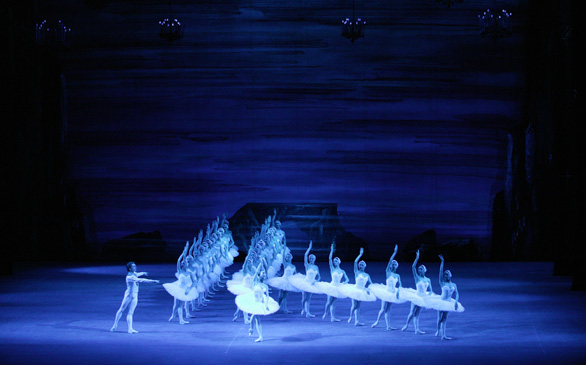 Classical ballets are an eduring and respected theatrical genre, renowned for their storytelling, ethereal wardrobe and splendid dancing; they are truly impeccable performances.

Such is the case with "Swan Lake," arguably the most prominent ballet piece in history, composed by Russian Pyotr Tchaikovsky during the mid-1870s. It was first performed by the famous Bolshoi Ballet in 1877 at the Bolshoi Theatre in Moscow, and now the company, which has since expanded, is bringing the acclaimed production to Downtown Los Angeles' Dorothy Chandler Pavilion.

The show will feature a live orchestra for five performances only, under the direction of Artistic Director Sergei Filin.

"Swan Lake" consists of four acts and tells the story of Odette, a princess turned into a swan by an evil sorcerer's curse.

Many versions of "Swan Lake" currently exist, but the Bolshoi Ballet's performance is sure to be one of the best. Production is led by Yuri Grigorovich, while choreography was shared among Marius Petipa, Lev Ivanov, Alexander Gorsky and Yuri Grigorovich. And the music, well, belongs to Tchaikovsky - and it will always remain in this manner.

This rendition of "Swan Lake" also boasts a lengthy list of gifted dancers, including young up-and-coming stars to the ballet scene. Viktoria Litvinova is one of these figures: The 23-year-old Russian native represents both beauty and talent at its best.

"I began dancing ballet when I was 4 years old," Litvinova says. "My parents would see me dance a lot. I would tell them 'Look, look at me dancing!'"

Ever since she first got involved with ballet, Litvinova received immense support from her parents. This led to her ongoing performance career, which she passionately enjoys.

"I love dancing, especially the modern dances," she says. "I really love the rehearsals. It sounds strange, but I do, I love them. That's my inspiration because I come in every day to work, to dance with our teachers to create something. I think this is interesting."

Litvinova plays the white swan in "Swan Lake," and she is sure to deliver a beautiful portrayal of the genuine, pure and innocent Odette, as she connects emotionally with the piece quite strongly.

"I think this is a sad ballet," she says. "The other night [during a performance in Canada], I saw the finale when the prince is seen in love and left alone, and I was really crying."

Litvinova went on to mention that she listens to music a lot during her free time, which does not come often since a dancer's ballet career is demanding. She also enjoys going to the movies when she can.

"Ballet is very hard work," she says when asked about her advice to those aspiring to dance professionally. "You really do not have free time...you must love your profession, you must love what you are doing."