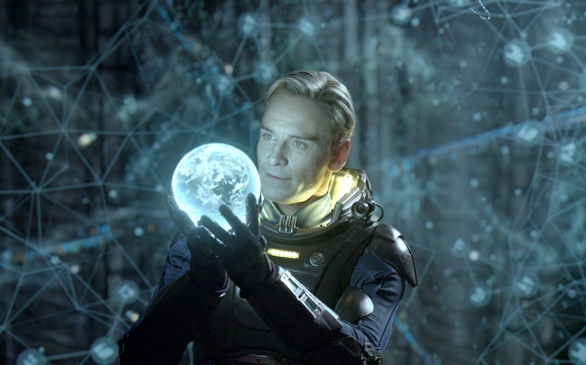 Every person has questioned their origin at some point: Where did we come from? Who made us? Why are we here? In Prometheus, it is the year 2093, and a team of scientists has set out to uncover the answers to those very questions.

After discovering numerous cave drawings across the world, Dr. Elizabeth Shaw (Noomi Rapace) sets out to find the origin of our species. Through careful deduction, she and a team of doctors and scientists discover the planet that primitive drawings hinted our species comes from. The team sets out on a two-year journey across space, led by Meredith Vickers (Charlize Theron). The ship, named Prometheus, is also home to a sort of service robot named David, played by Michael Fassbender.

All seems to be going well. The team has reached the unnamed planet, and before even landing, they have spotted man-made structures. Once grounded, the team ventures out onto the foreign planet and into the structures, which seem to be long tunnels with no apparent purpose. However, the team quickly realizes that there really was humanoid life on the planet; but to their horror, there is also alien life.

After two of the team’s members are killed by strange snake-like alien creatures that have spawned from some sort of black goo, the rest of the team finds themselves fighting for survival in a world that was not at all what they expected it to be. To add to the alien problem, David seems to have an agenda. After infecting Dr. Shaw’s boyfriend with a strange parasitic alien virus, he reveals to Shaw that she is three months pregnant - with an alien child. What transpires next is perhaps the most gruesome scene in the entire film: Dr. Shaw decides to attempt to cut the baby out of herself.

In his return to sci-fi, director Ridley Scott really does impress. Prometheus is easily the best science-fiction film in years. The only problem with the film is the lack of clarity in some of the characters’ motives. If you can look past that, sci-fi lovers are really in for a treat. But even looking beyond the sci-fi genre, Prometheus is a great film overall. Particularly impressive is Rapace’s performance; she stands out as Dr. Shaw, and there is not one moment that she does not make 100 percent believable.

All in all, Prometheus has proved to be one of the best films of the year. There is not a boring moment in the entire two-hour runtime.