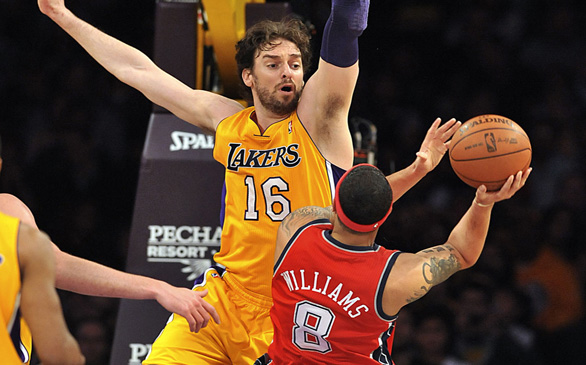 A sign and trade deal sending Pau Gasol to the Nets and Deron Williams to the Lakers is unlikely.
(Credit: Rose Palmisano/Orange County Register/MCT)

Will Lamar Odom join the Los Angeles Lakers? Probably not. What about Deron Williams? Ditto.

Lakers fans won't want to hear it, but their off-season remodeling project remains as difficult as ever.

Williams, a likely free agent this summer and one of the NBA's top point guards, was cognizant of the Lakers' limited purchasing power. They have very little to spend on free agents because they are so far over the luxury-tax threshold. Their biggest tool is the $3 million "mini" mid-level exception.

"I know they don't have any money to just go out and sign me. It'll have to be some kind of (trade)," Williams said Wednesday at the E3 Expo in Los Angeles, where he promoted the video game "NBA Baller Beats."

Williams, 27, has a player option for $17.8 million next season with New Jersey. He averaged 21 points and 8.8 assists this season.

"I used to hate them. They pushed us out of the playoffs three years in a row," Williams said. "We'll see."

As for Odom, the NBA is standing firm on the rule that players cannot return to their old teams for a full year after being traded, a change made in the new collective-bargaining agreement last December.

Players formerly had to wait one month before rejoining teams that traded them, sometimes negotiating quick buyouts from their new team to go back to their old one, a scheme the NBA thwarted by creating the revision in December.

Even though the lockout-shortened season began in December, instead of the usual October launching point for an NBA season, a league spokesman said the one-year rule would not be bent to allow Odom to possibly go back to the Lakers.

He was traded to Dallas on Dec. 11 for a first-round pick that the Lakers subsequently sent to Houston in the Derek Fisher trade.

Odom, 32, had a rough time with Dallas, averaging 6.6 points before being deactivated late in the season. He is still officially a member of the Mavericks but is expected to be bought out this month for $2.4 million, making him a free agent. He was due to earn $8.2 million next season.

Odom would have to miss about six weeks of the season if he waited to join the Lakers in December, an unlikely event according to a person familiar with the situation.

The Lakers could offer Odom the $3 million mini mid-level exception next season or $1.4 million, the veteran's minimum for a player with his experience.

Lakers assistant coach Quin Snyder was interviewed to be head coach of the Charlotte Bobcats, something he called a "great experience."

"It's an honor to be considered," Snyder said. "I'm loving being a Laker, but I hope to have an opportunity to be a head coach someday."

Before joining the Lakers, Snyder was an assistant with Philadelphia and head coach of the University of Missouri for seven seasons.

The Bobcats went 7-59 and set an NBA record for lowest winning percentage (.106).