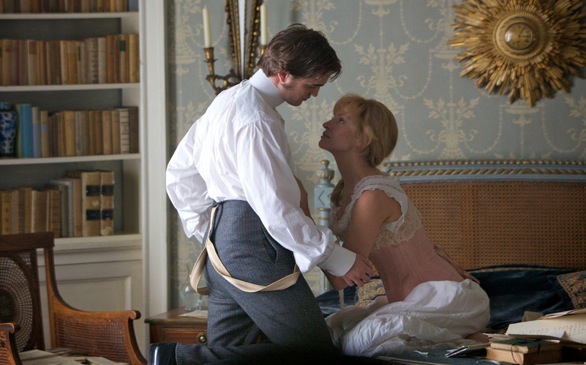 Set in late 1890s Paris, Bel Ami is a story of one man’s rise to the top of the social ladder through his sexual exploits with powerful women. Robert Pattinson stars as Georges Duroy, a rundown soldier returning from war. Through the charity of his now-successful comrade, he is given a job writing a column at a newspaper. However, Georges is not a talented writer, so he enlists the help of Madeleine Forestier (Uma Thurman) to help him.

Through Madeleine’s wit and talents, Georges finds his newspaper column to be a success. However, when he tries to woo her, Madeleine makes it clear that he will not prevail in his advances. She suggests that he instead pay a visit to her friend Clotilde (Christina Ricci), which he decides to do. But Georges is not satisfied having a relationship with just Clotilde; he also begins an affair with the wife of the newspaper editor in order to gain his favor. Slowly climbing toward the top of the social ladder, he finds another opportunity to acquire power when Madeleine’s husband dies. Immediately, he asks for her hand in marriage, and she accepts his offer.

Unbeknownst to Georges, he is not the only one in the marriage who is having an affair. He begins to suspect that Madeleine is sleeping with her “friend,” who visits their home often. It is only after her friend dies and leaves her over a million francs that Madeleine confirms his suspicions. Georges is shocked, but when Virginie, the editor’s wife, reveals that Georges’s coworkers have entered a deal that will earn them 70 million francs each, his rage reaches its peak. He hatches a plan that will not only exact his revenge, but will also guarantee that his social status is not challenged. Unfortunately, this plan does not take into account the feelings of Virginie, Madeleine, and worst of all Clotilde, whom it seems that Georges actually cares for.

After Twilight, one might find themselves questioning Pattinson’s acting skills, but in Bel Ami, Pattinson puts to rest any doubts of his talent. He is, truth be told, quite good in this film. He is not the only recognizable talent, though. Uma Thurman (Madeleine), Christina Ricci (Clotilde) and Kristin Scott Thomas (Virginie) all provide magnificent performances.

However, despite their talents, the film does seem to lose itself somewhere around the middle. It is unclear for a while exactly where the plot is going, but Bel Ami manages to pick up again at the end. It really delivers in the last portion of the film, where every deception is revealed and emotions run at an all-time high.

Though sometimes the film seemed to go on tangents that led away from the underlying plot, Bel Ami is a film worth seeing. The talent in the film is reason alone to see it, as the performances are all delivered flawlessly.