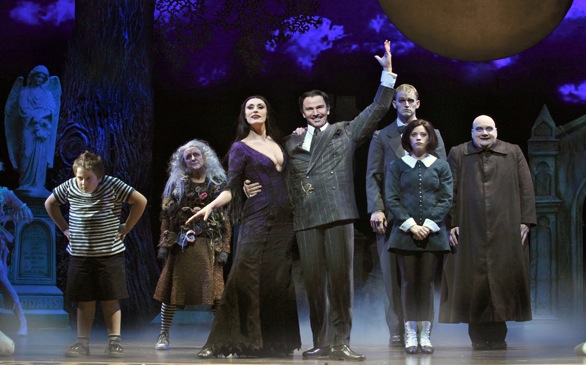 The cast of "The Addams Family"
(Credit: Jeremy Daniel)

“The Addams Family” opened Tuesday night at the Pantages Theatre to a very excited crowd, who snapped their fingers enthusiastically along with the familiar theme song that opened up the show.

The musical began with a little dance on the graveyard to “When You’re an Addams,” and the family celebrating what has made the spooky group so iconic: seeing the beauty within the darkness.

When most of the family goes back inside the house, Wednesday (Courtney Wolfson) sneaks off to unlock her ghost ancestors from their crypt. You see, she has fallen in love with Lucas (Brian Justin Crum), a “normal” guy, and plans on inviting his family over to meet hers. She hopes that with the help of her ghost family, she will be able to control the normalcy of the night, as she fears that her living family, particularly her mother, will scare off Lucas’s family, or worse –Lucas himself.

The lovestruck Wednesday seems to have come down with a case of happiness, something unheard of in the Addams clan. Wolfston impressively portrays this emotion through her  sunny solo performance of “Pulled,” which shows great range.

Both parents notice the change in their usually gloomy child’s demeanor, and fear that they’ve lost her. Morticia (Sara Gettlefinger) in particular is shocked that a daughter of hers has turned a new leaf. Wednesday later confides to her father that she and Lucas intend to marry, but asks him not to tell Morticia, which puts Gomez (Douglas Sills) in quite a predicament. He would never lie to his wife, but also would never betray his daughter, which introduces a new central conflict between husband and wife –an element that wasn’t included in the original Broadway run. This plot addition, along with new songs such as “Secrets” (rousingly performed by Gettlefinger), help solidify the theme of family and loyalty.

The show’s climax is the big family dinner, where two worlds collide. Lucas’s family is absolutely horrified by the Addams -- who take their horror as a compliment -- and madcap situations ensue.

The cast has a great sense of ensemble and skillfully delivers a winning plot through song. Grandma Addams (Pippa Pearthree) and Pugsley (Patrick D. Kennedy) carry their misadventures subplot well, and play a key role in what shifts the dynamic during the play. Blake Hammond as Uncle Fester brings great comedic moments that not only give nods to current pop-culture references, but shifts comedic polarities and brings a funny, innocent unawareness to his love affair with the moon. In the “Moon and Me,” he and his love share an aerial dance that also highlights the classic gothic set design, no doubt inspired by the art of Charles Addams, as well as filmmaker Georges Méliès.

In no ways a typical Broadway standard, like the family it portrays, this show is quirky, fun and different. If you love the Addams, or have more of a macabre taste, this show is for you –and a really great time.

“The Addams Family” is playing now through June 17 at the Pantages Theatre, 6233 Hollywood Blvd., Los Angeles. Tickets start at $25. For more information or to purchase tickets, call (800) 982-2787 or visit BroadwayLA.org.