Denmark Triumphs in Group of Death 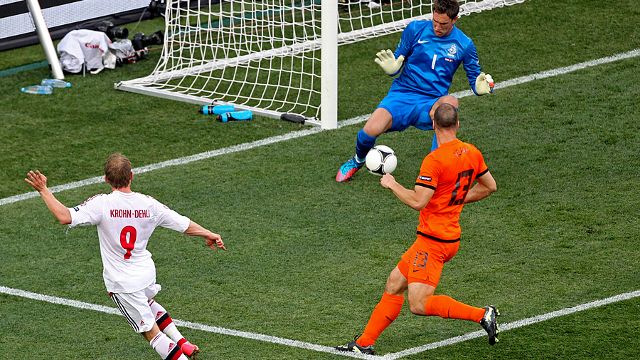 ESPN analyst Alexis Lalas warned, “Don’t go to sleep on the Danes.” Coming into the first match-up of The Group of Death, the consensus has long been that the #9 ranked Danes were just horribly unlucky in this draw (their foes are #3 Germany, #4 Netherlands, and #10 Portugal) and in any other group, may have been the heavy favorite to continue. Most people undermined the inexperienced team (only 2 of its squad have been to a Euro Cup championship), a dangerous thing to do.

The game started off well enough for the Dutch, they kept possession and made many a shot on goal, nothing threatening, but good tries to get the game started. Then, well, they basically went to sleep on the Danes. In minute 24, Michael Krohn-Dehli weaved his way through three Dutch players and managed to sink one in the back of the net. With more than an hour left of game, and with a team that had good reason to leave the likes of Klaas-Jan Huntelaar (most goals scored in Euro Cup qualifying) and Dirk Kuyt on the bench, it seemed like the Dutch could turn it around. No one can say that the Netherlands didn’t apply pressure; they had 28 shots on goals to Denmark’s 8, but so uncharacteristic of them, never converted them to shots in the goal. The team with the most goals in qualifying (37) played the team with the second-to-last most goals (only 15), and lost. Many are calling it the biggest upset so far in this Euro Cup; I’m calling it another day in soccer.

In the other match-up, both teams seemed to be sleeping. Portugal, whose star forward Cristiano Ronaldo had the least amount of touches on his team, were only woken up when Mario Gomez made a clean header, guiding the ball into their up-to-then-heavily-defended goal in minute 74, but with only 16 minutes left in the game, they didn’t have much time to turn things around. They had an early chance moments before the first half ended when a ball hit the goal post and land squarely, cruelly on the goal line (and not an inch in their favor!). They had many similar close calls, but like the Dutch, never managed to convert after being scored on once.

Here’s hoping neither Spain nor Italy fall asleep at their big match-up tomorrow. 4 years ago, “La Furia Roja” knocked the Italians out in the quarter-finals on their way to claiming the championship, and after the Italians (2006 World Cup champions) disappointed at the last World Cup by not even making it past the group stages, they have a lot to prove.