Will Smith: Busting Robots and Rumors 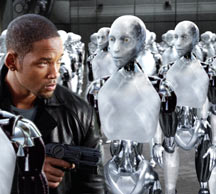 In the latest issue of "US Weekly" magazine, it’s reported that actor and rapper Will Smith spent $1.8 million on an 1,100 square foot trailer more state-of-the-art than the robots in his latest film, I, Robot. So what happened to the happy-go-lucky guy from "The Fresh Prince of Bel-Air" who was once content with the simple life and constantly in awe of the "Gatsby" world around him?

"That’s terrible!" says Smith with a laugh as he reads the article, simultaneously shaking hands with everyone around him. "That’s a million dollars exaggerated! They just make stories up. People just couldn’t possibly imagine that people could make stuff up like that.

"Especially when you’re in New York. When you’re in New York you get written up about all the time," Smith adds. "[The ‘Post’] said I went to the Prince concert and couldn’t get in, [and that] I wanted my whole crew in, and the tickets were $100 a piece. And I said, ‘I’m not paying to see this concert!’ and left.

It’s difficult to imagine that the Oscar nominee — who graciously accepted fan accolades the night before at the I, Robot after party — would refuse to purchase tickets or demand a $1.8 million trailer. Maybe his robo-phobic character, Detective Spooner, is similar to Smith?

"Spooner is the complete opposite of Will Smith," says Smith. "What I thought was great for me, was that it was the first time I played a character that was that troubled. Six Degrees [of Separation] a little bit, but this character is really troubled. That’s not me at all. I’m tickled pink."

When not throwing supposed temper tantrums at Prince concerts, Smith concentrates on his equally lucrative music career and, most importantly, his family, who he says often visited him on the I, Robot set.

"They’d be on set all the time. It’s tough because my daughter thinks that there’re really robots. She’s 3," says Smith with a laugh before channeling Dr. Phil to explain exactly how he balances business and family.

"First and foremost, just like in my house when I was little, I knew my mother was the center. Mommy has to be taken care of first. If mommy’s straight, then everyone else will be straight," Smith says. "I’m very clear that Jada’s physical, mental, spiritual health and comfort come first and foremost, and then everything else comes from the garden. For me, it’s very important to keep my garden watered and healthy."

Before working in the garden, though, you have to remove your shirt. And when Smith does just that in the film, hoots and hollers from the crowd greet his ripped abdominal muscles.

"Jada says all the time, ‘No woman wants a man that another woman doesn’t want!’ She’s very comfortable with the nudity," says Smith. "When she sees me slipping a little bit, [gaining a] little weight, she’s like, ‘Hey, fella!’"

But according to Smith, wife Jada doesn’t seem mind if he gets a little soft on her. "Oh god, I cry all the time when watching movies. I go with whatever the emotion of the film is," reveals Smith. "It’s not difficult for me to go where the filmmakers are trying to take me."