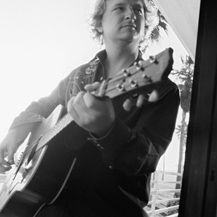 "4-wheel drive, 4-wheel drive, 4-wheel drive. Stop!" These are the lyrics to the first song Paul Chesne ever wrote. He was 4 years old and trying to cheer up a crying friend as they drove their Big Wheels around the yard. His buddy ended up laughing and nowadays Chesne continues to entertain audiences from the Viper Room to the Kibitz Room and everywhere in between.

While his lyrical content has evolved to slightly heavier subject matter, mainly women and heartache, the singer-songwriter has carved a niche for himself with a brand of music he artfully characterizes as "Dr. Dre meets Johnny Cash."

Previously studying English in college helped broaden his vocabulary as well as his horizons. "I was reading like 500 pages a day. Now the most that I read is the news and political bullshit. It makes me angry, but that’s another thing that can be inspiring," notes Chesne.

Growing up, Chesne’s older siblings reared him on music like Simon and Garfunkel’s Parsley, Sage, Rosemary & Thyme, Bob Dylan’s Blonde on Blonde, and numerous Beatles’ records. Chesne remembers: "They would buy me albums like that every year for my birthday. I ended up getting into country stuff when I was 18. I heard Johnny Cash’s American Recordings album, then I heard Willie Nelson’s Shotgun Willie the same week. That week pretty much changed my whole life."

Since then, Chesne has released four CDs with various musicians behind him, all leading up to this year’s Wet Dog Man produced by Dwight Yoakam’s drummer, Mitch Marine. From the spitfire lyrics of "For One Day" to the infectious "Offshore Bank Accounts" and heart-wrenching "Goodbye Baby Goodbye," Chesne delivers material full of gritty humor laced with country-tinged rock riffs and beats that grab you from the gut. Chesne produces his own brand of dark comedy in tracks like "Something About Her," where his lyrical growl/purr becomes entangled with beautiful stringed instruments to create what he refers to as "a different take on a traditional love song, but still a love song in a really deep way to me."

Chesne’s genuine sincerity infused with just the right amount of humor is captured in the CD’s cover art, a painting by renowned political poster artist Robbie Conal. Chesne states: "Growing up in L.A. I had seen [Conal’s] posters for years. I would be sitting in the passenger seat of my parents’ car looking out the window and would come to this grotesque image of Oliver North or Ronald Reagan or Bush Sr. It always struck me. When we were doing the album cover I came up with his name and e-mailed him the next morning. He e-mailed me back by 2 p.m. and was like, ‘I’d be honored to do it.’"

The fact that Conal unhesitatingly agreed to do the painting is symptomatic of the reputation Chesne has as having a talented, electrifying personality. This is also evident in the never-ending list of musicians Chesne can call upon to be members of the Crazy Mutherfuckers, his current band of support players at shows – talented fixtures of L.A.’s seething underbelly like Mitch Marine and, past and present members of bands like the Vacation and Open Hand. Chesne says: "I have a rolodex of four or five guys on each instrument depending on the night and who’s available because so many are professional and in some cases they’re out of town or making more money on a specific night than I can offer. Everybody that plays with me does it for fun."

Fun is definitely one thing you can count on from a Chesne and the Crazy Mutherfuckers show, but you never really know what else to expect. Armed with his guitar, he frequently ventures off stage to mingle with the crowd or get on top of a bar and sing. He has even performed a set with a string quartet.

All in all, Paul Chesne is the same effervescent character that came up with "4-Wheel Drive Stop" to lift a sad friend’s spirits – he just wants to give you a reason to smile. He remarks: "I’ve got things to say, whether they’re right or not, hopefully they get people thinking. I just want people to have a good time [and] escape, but also be moved and maybe take that back to whatever it is they’re doing in an unpretentious way."

Wet Dog Man is currently available. Paul Chesne will perform Oct. 19 and 26 at the Viper Room in West Hollywood, Oct. 27 at Cozy’s Bar & Grill in Sherman Oaks and Nov. 4 at El Cid in Silver Lake. For more information, visit www.paulchesne.com.