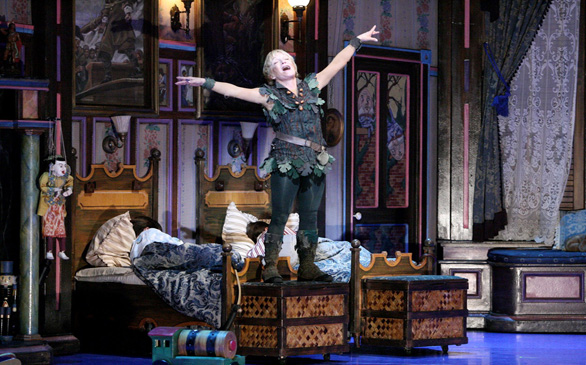 Cathy Rigby plays the magical title character in "Peter Pan," a show filled with a solid number of musical sets, above par acting, entertainment for everyone, and a storyline that pulls you in and keeps you there for the entire show.

"Peter Pan," directed by Glenn Casale and choreographed by Patti Colombo, features a cast of all ages. Sunday afternoon's performance at the La Mirada Theatre for the Performing Arts in La Mirada witnessed a sold out house, with a performance that brought laughs, action and drama from beginning to end.

Rigby is well-known for her role, but another actor who shines in the production is Brent Barrett, who plays both Mr. Darling and Captain Hook. Barrett delivers an unforgettable performance as both characters, but shines in Captain Hook's persona. He has great comedic timing, sings well and dances better than expected --his numbers definitley leave the public very satisfied.

An impeccably sexy and provocative performance came from Tiger Lilly, portrayed by Jenna Wright, while Krista Buccellato's Wendy Darling excelled as the show developed. The entire cast deserved the standing ovation it received in the end.

"Peter Pan" includes two acts, each containing three scenes that consist of Peter Pan's wonderful fairy tale along with many musical numbers. To close out the first scene of Act I, Peter, Wendy, John and Michael sang "I'm Flying." This performance is one of the best because it features four different voices and individual dancing from each.

But the true show-stealer was "Hook's Waltz," performed by Captain Hook and his crew of pirates. In this hilarious numebr, Hook is perfect, while the pirates provide a spark to the tune --kids truly loved this portion.

Musical
‘Back to the Future’ musical confirmed for Broadway in 2023
1,174 views

Musical
Summer: The Donna Summer Musical Comes to the Hollywood Pantages from Nov. 5 thru 24!
2,934 views