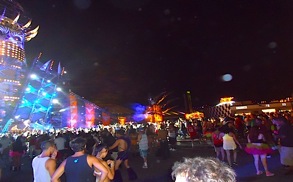 Seven different stages were set up throughout the racetrack.
(Credit: Gabrielle Olya)

For three nights, the Las Vegas Motor Speedway was converted into a haven of sorts for fans of electronic dance music, with sets from some of the world’s best DJs, fireworks, carnival rides, art displays and of course, plenty of space to dance among the seven separate stages. The 16th annual Electric Daisy Carnival attracted over 100,000 attendees per night, who came from all over the country and beyond to experience the one-of-a-kind festival.

While the “dusk until dawn” adult carnival certainly had its high points, the event was not without a few hitches –but let’s start with the positive:

The one thing that attracted all of these diverse people to gather in Las Vegas was the music, and this was the one area where EDC truly delivered. Every DJ you’ve ever heard of was there (except Skrillex, where was he?): Kaskade, Sebastian Ingrosso, Benny Benassi, Afrojack, Above & Beyond, Knife Party, Steve Aoki, Alesso, Calvin Harris, David Guetta and Avicii all performed over the course of the three nights.

The music was accompanied by stunning visual displays, laser lights and fireworks, all adding to the overall experience. The festival also allowed for some of these big names to perform together, including Afrojack and Steve Aoki, who had a joint set the first night.

Perhaps just as essential to the experience as the music was the crowd. Despite the masses of people who were there, there was an overall sense of community and camaraderie amongst attendees based on a shared love of the music. Everyone was there to have a good time, and many came decked out in costumes, neon colors and body paint, making for truly extraordinary people-watching.

Night two of EDC left many fans disappointed, as the performances were stopped prematurely due to extremely high winds. At 1 a.m., Insomniac, who produced the event, and public safety officials made the decision to shut down performances on the main stages –right in the middle of crowd favorite Calvin Harris’s set. This meant Avicii and Tiesto’s much-awaited sets were both cancelled for the night (though Avicii’s was rescheduled for night three).

Obviously, this was out of Insomniac’s control, and given the circumstances, the situation was handled as best as it could be. Fans were allowed to stay on the premises until 5:30 a.m., and music was provided through speaker systems around the 1,000-acre racetrack.

While unforeseen extreme weather circumstances were out of event organizers’ control, other aspects of the event that went awry were. Transportation getting to and from the venue – which was over 15 miles from the Las Vegas Strip, where many attendees were staying – was an absolute nightmare. There were shuttle passes available for purchase in advance at $70 a pop, but for people coming in larger groups or those not staying for all three nights, cabs seemed a more viable option. However, this ended up not being the case.

Cab lines to exit the festival on night one were so long, some concert goers waited over four hours to get a taxi. A lack of staff meant people were constantly cutting the lines, and there were insufficient barriers set up to prevent this from happening. Waiting on a cab line for an entire sunrise was an unanticipated and unwelcome part of the experience.

However, Insomniac seemed to have learned from the lessons of night one, as on night two, despite a mass exodus of people – with 90,000 exiting by 1 a.m. due to the early closure – cab lines were well-regulated and moved smoothly.

Of course, with an event this large-scale, expecting everything to run perfectly might be too tall of an order. Overall, EDC provided a unique opportunity to see some of the greatest EDM acts in the world in one weekend, to dance to your heart’s content, to meet people from all over the globe, to ride carnival rides and to dress like it’s Halloween in the middle of the summer: it’s safe to say there is no other experience quite like it.