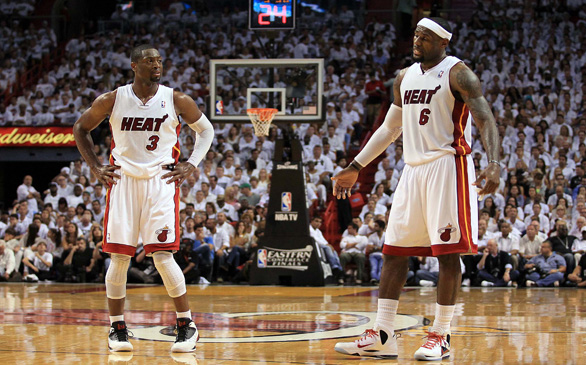 It is all or nothing for Dwyane Wade (left), LeBron James and the Miami Heat.
(Credit: Allen Eyestone/Palm Beach Post/MCT)

The NBA went from almost not having a season to delivering a Finals match-up that will go down in history: The stage is set for the Oklahoma City Thunder to face off against the Miami Heat for the 2012 NBA Championship.

This year’s Finals will deliver more than just excitement, as the NBA’s leading scorer, Kevin Durant, and the NBA MVP, Lebron James, go head-to-head. The Thunder has a strong lineup this year, and is more than capable of winning its first championship.

This Finals match-up will bring together some of the NBA's best players, as the Big Three look for their first NBA Championship since James took his talents to South Beach. James, Dwayne Wade and Chris Bosh are headed to the Finals once again, but hope to have a different outcome than last year. It's clear that James is focused, playing what some analysts say is the best basketball of his career.

Heading into the Finals, James is coming off of two great performances in Games 6 and 7 against the Boston Celtics. He finished Game 6 with 45 points, 15 rebounds and five assists. He joins Wilt Chamberlin as the only two players in NBA history to have those stats in a playoff game.

In Game 7, James had more help from his teammates, as the Big Three all ended in double-digits. James came alive in the fourth quarter, which he has been widely criticized in the past for not doing. He ended with 31 points, 12 rebounds and two assists. Wade had 23 points, six rebounds and six assists to go along with Chris Bosh's 19 points and eight rebounds.

The Heat undoubtedly has talent, but for the first time in the post-season was challenged to a Game 7. The Heat's playoff run included dominating the New York Knicks, winning 4-1, and then going on to battle the Indiana Pacers, winning the series 4-2; the team finished off by defeating the Boston Celtics 4-3.

Unfortunately, as talented as the Heat is, the team’s flaws are clear. Although the Heat has a starting lineup that features Wade, James and Bosh, it also has a weak bench; James shouldn't have to score 45 points for a team to win a game. It's clear the Big Three will end in double digits, but as they go up against the Thunder, the Heat’s bench will need to be more efficient. In Game 6 against the Celtics, while all eyes were on James, my eyes were on the bench, which only contributed 13 points to the final score.

After Bosh was injured during the post-season, the Heat's colors truly showed, and once Bosh returned, he became a valuable asset. His presence does create match-up problems, and it allows James and Wade to get more open looks.

Still, the Heat must be aware that it is going up against a complete team. If the Heat is going to win the NBA championship, its bench needs to be more aggressive because they will need all of their players to score. As the Heat faces the Thunder, its defense needs to be on point, and the team needs to play clean basketball and limit turnovers. The Thunder is dangerous, and is not afraid to perform at a high caliber, no matter how big the stakes.

Although a young team, the Thunder entered the playoffs with championship mentality. The Thunder showcased its talents by beating the Western Conference's three powerhouse teams. In the first round, the Thunder swept the 2011 NBA Champions Dallas Mavericks 4-0, dominated the Los Angeles Lakers in round two winning 4-1, and upset the San Antonio Spurs coming back from a 2-0 deficit and winning the series 4-2. The Thunder made history as it became the only team outside of the Mavericks, Lakers and Spurs to win the West since the 1998 Utah Jazz.

One thing this team has is resilience: it is not afraid of big names or big games. The Thunder knows that it has more than enough talent to get the job done, even if it is faced with an 18-point deficit going into the fourth quarter. The Thunder has the most complete team in the playoffs this year, which is why it is headed to the Finals for the first time in franchise history.

Durant is playing his best basketball, averaging 27.8 points, 7.9 rebounds and 4.2 assists in the post-season. He has also proved he is not afraid to take big shots to win the game. Fans still jump for joy as they remember the game-wining three-pointer that Durant delivered versus the Mavericks.

Durant is an aggressive player who has the luxury of having Russell Westbrook by his side. Westbrook has been criticized for taking too many shots, but now it seems he is aware of his shot selection. Westbrook is a key asset, as he is capable of driving to the basket, and being able to not only score but draw the foul. Westbrook has showed up in the post-season, and will only continue to be aggressive on both sides of the ball.

One thing the Thunder has over the Heat is its defense. Surge Ibaka and Thabo Sefolosha have risen up during the playoffs, taking on players, blocking shots and scoring. Their contribution on both sides of the ball will be crucial as they take on the Heat.

Although the Thunder is headed to the Finals for the first time, they have a key asset in Derek Fisher, who is no stranger to being a part of championship teams. His Finals and playoff experience seems to have rubbed off on the Thunder, and his leadership and clutch shots will also play a big role in the Finals.

The Thunder also has an experienced center in Kendrick Perkins. His aggressive attitude will help them in the paint, and will help clog up the middle to prevent easy lay-ups. Outside of a strong starting lineup, the Thunder not only has the NBA’s leading scorer on their team, but also the NBA's sixth man of the year: James Harden's performance will make or break the Thunder’s championship run. Harden has been reliable throughout the playoffs, averaging 17.6 points, 5.2 rebounds and 3.3 assists, and his presence coming off the bench will help ignite other players.

Harden plays like a starter, but knows his role coming off the bench. With Durant, Westbrook, Harden, Ibaka and everyone else on the team continuing to play good basketball, I don't see the Thunder losing this series. Besides its strong defense, the Thunder has balanced scoring, something that the Heat doesn’t have. Sefolosha and Ibaka will create problems for Wade and James, and will try to create turnovers that Westbrook and Durant can capitalize on.

Just like the Heat, the Thunder loves to run and dunk. Both teams love to make highlight reels, but fast-break points can only get you so far. It won't be easy, but the Thunder has what it takes to bring Oklahoma City's dedicated fans a championship.

The Thunder will come out strong at home, and I think go on to win the series 4-2. The Thunder has proven worthy of reaching the NBA Finals, beating and upsetting some of the best teams in the West.

As great as the Heat are, it has been said and proven year after year that although a great player can win a game, it takes a great team to win a championship.