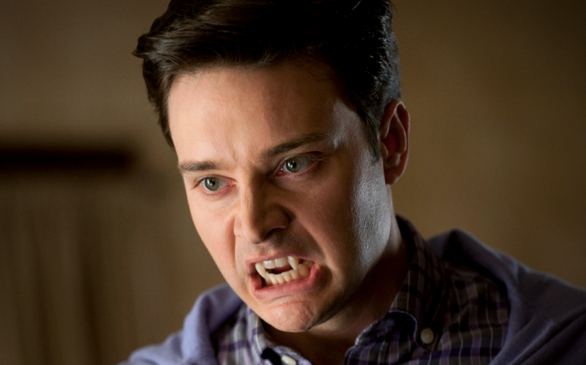 Steve Newlin reveals to Jason that he is both gay and a vampire in the "True Blood" season premiere.
(Credit: Home Box Office, Inc.)

The episode starts exactly where the previous season left off, which means a lot of dead characters (Debbie, Nan, Marcus, Jesus) and the return of the undoubtedly enraged King of Louisiana, Russell Edgington.

Old Eric is back, and he’s on the rebound. When Bill and Eric’s Sookie senses start tingling, triggered by Debbie’s onslaught, Eric simply responds bitterly with, “Fuck Sookie.” However, Bill is still eager to go to her rescue, but in an attempt to do so, he and Eric both get caught by Authority officials. With some teamwork they manage to escape, and Eric meets an old friend named Nora whom he greets quite...passionately. As in, they stick their tongues down each other’s throats then proceed to have loud vampire sex in a cargo container, effectively sexiling poor Bill. Turns out Nora is Eric’s sister...no, not his real sister but his vampire sister, another one of Godric’s children. However, Eric and Nora’s activities are interrupted by a phone call from Alcide, who most likely informs Eric of Russell’s return. Before Eric, Bill and Nora can leave the dock, they are taken by more Authority officials.

Jason is in for a bit of a surprise when former Fellowship of the Sun leader Steve Newlin shows up at his doorstep. After glamouring Jason to let him inside, Steve has a few confessions to make. First off, he’s a vampire, and second, he’s madly in love with Jason. Poor Jason, who when he finally comes to is naked with a blanket covering him and tape over his mouth, tries to let Steve down gently, saying he is flattered but that “this dog doesn’t bark up that tree.” Apparently Steve doesn’t take rejection well and attacks, but Jason is saved by Jessica’s arrival, as she claims that Jason is hers. Jason rescinds Steve’s invitation into the house, leaving him and corset-clad Jessica to have sex.

Like any teenager with a mansion to themselves, Jessica decides to throw a party while daddy is away. After the Steve Newlin incident, Jason is under the impression that he and Jessica might be back together. He shows up at her door like a lost puppy, only to be told that they are still just friends with benefits. Jason joins the (pretty lame) party, which consists of sorority girls, underage drinking and “Rock Band.” After failed attempts to get Jessica’s attention, as she is eyeing a hunky brunette, Jason instead leaves with a pretty blonde. But while old Jason would have taken advantage of the girl without hesitation, new Jason decides that he’s done with his days as a player, and resorts to taking the girl back to her sorority house.

Sam is being accused of murdering the werewolf pack master Marcus, who is also the ex-husband of his girlfriend Luna. The pack comes after him, but he refuses to rat out Alcide, the true killer. In order to keep Luna and her daughter safe, he leads the pack, which includes Marcus’s mother Martha, to the body, knowing that he will be killed soon after. But buff and brawny Alcide comes to the rescue and takes responsibility for Marcus’s murder. Most of the pack is enraged at Alcide’s betrayal, but others bow down to him, seeing him as the new pack master. Everything is interrupted by Martha’s cry of despair as she initiates the proper werewolf ritual over her son’s body...which means eating it.

Pyromaniac on the Loose

Patrick, one of Terry’s Marine friends, is in town with some news. We were under the impression that the fire that burned down Terry and Arlene’s house was a result of what Terry calls “a misunderstanding with a super pretty ghost named Mavis who turned out to be real nice.” However, Patrick reveals that there have been a series of fires connected with the Marines in their unit, even killing two of its members. For once, a supernatural being might not be involved, and Patrick thinks another Marine is responsible.

In a desperate attempt to save Tara after she is shot by Debbie’s bullet, Sookie begs Pam to turn Tara into a vampire in exchange for an IOU and a good word with Eric. Reluctantly, Pam feeds Tara her blood, puts on an ugly Wal-Mart sweatsuit and climbs into the ground for the transition. While they wait, Lafayette gets a new ‘do and shaves his head, while Sookie catches up with Alcide, who wants to take her with him to protect her since Russell is back in town. Sookie refuses, ridden with guilt about killing Debbie. Lafayette is distraught after Jesus’s death, but the body has disappeared, hinting that perhaps Jesus is not gone for good. Finally, the night goes on and Pam rises from the ground. Sookie sees that Tara has not been revived and weeps, thinking she is dead. A few moments later, Tara emerges a hungry new vampire.

Tara reacts to her new immortality
The mysterious Authority is introduced
Bill and Eric face consequences
Another Steve vs. Jessica showdown

Watch a preview of next week’s episode here.