Office Relations: How to Deal With Annoying Co-workers 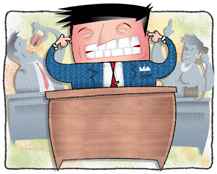 Untitled Document When a coworker’s beer belly brushed against my hip, I decided I’d had enough of his very intimate conversational style. So I instituted the Arm’s Length Rule. Holding my left arm out between us, I said, "I can hear you perfectly well from here. So you see there’s no need for you to be any closer than this."

No one else had confronted Bob on his annoying habit – which he lamely attributed to "living in Europe" – because they were afraid they might offend him.

"Anyone who’s aggressive enough to take that posture is not going to be offended by something that you say," says Stephen Viscusi, host of the syndicated radio show "On the Job."

He’s right – Bob chuckled and backed off. But not all annoying coworkers can be dealt with so easily, forcing you to consider your options.

John Gannon, a clinical psychologist from Pismo Beach, says the annoyed worker has four choices – advise, adjust, avoid or accept – but each comes with a potential drawback.

Advising (or confronting) could strain relations; adjusting requires you change (i.e., moving your desk so the shoulder rubber can’t get to you.); you can only avoid someone so long, and acceptance takes inner strength.

Even if you aren’t a confrontational person, Viscusi advises people to confront.

"Usually, peers will push you as far as they can to see what they can get away with," says Viscusi, author of On the Job – How to Make it in the Real World of Work. "But they also respect people that are very direct."

On the other hand, a little tolerance in the name of good relations is sometimes your best bet to workplace harmony.

"Chances are, if you’re annoyed by others, others are probably annoyed by you," Gannon says.

THE TYPES OF ANNOYERS AND HOW TO DEAL WITH THEM:

Offense: He’s cornered you and won’t stop blabbing about resurfacing his driveway.

Solution: Stand up and look at your watch, as if you have a meeting to go to. If you have to, just say, "I gotta go" and walk away, Viscusi says, the constant gabber won’t even blink an eye. If the blabbermouth is on the phone, use a cell phone to call your line, then tell the gabber you have another call.

Solution: Tell him an important person you just talked to on the phone made a comment about the loud noise, suggesting that his thunderous talking is hampering your work. If that doesn’t work, resort to headphones or ear plugs.

Offense: He can’t stop touching you in conversation, whether it’s poking your arms or rubbing your shoulders.

Solution: Gannon suggests honesty, saying your spouse wouldn’t appreciate the touching. But if you can’t muster the courage, Viscusi says, lie. One good tactic, he says, is to complain that you have bursitis or some other ailment that hurts when touched.

Offense: She’s always bringing her smelly food to her desk, which makes you want to retch.

Solution: A humorous comment might allow you to make a point without contention. ("Man, that’s some strong fish you got there" or "Boy, you THE CREDIT TAKER

Offense: During a meeting, he takes credit for something you did.

Solution: You don’t want to come across as a whiner, Gannon says. So approach him humbly – "I could be mistaken, but I thought that was my idea." If he agrees it was, ask him to inform the boss. If he denies it, don’t share information with him in the future. As a rule, keep a work journal to document important talks with coworkers, so that if you have to consult with the boss, you’ll have specifics that give credence to your claims.

Solution: Appear disinterested, then cut the conversation short by turning the talk to something work-related.