Rock of Ages Shows Little 'Glee' for the Hair-Metal Era 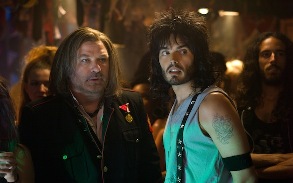 Most movie musicals, even in the age of "Glee," still face that awkward moment when somebody - say her name is "Sherrie Christian" - riding a Greyhound, bursts into "Sister Christian" by Night Ranger, and the rest of the bus bursts in to join her for the chorus.

Audiences today titter at that. But you measure the movie by how quickly we get over it.

Rock of Ages, the big-screen version of the jukebox musical set to '80s "hair metal" anthems and ballads, never does. The all-star cast is game, but the filmmakers can't stop winking and mocking the mockable music and the era long enough to let the picture, built around over-the-top tunes by Foreigner, Bon Jovi, Journey and others, pay off.

It's enough to make you "stop believin'."

Tom Cruise, as burnt-out rocker Stacee Jaxx, will do his best Axl Rose impression - bare-chested belting, waving a mike-stand bedecked in scarves - or Diego Boneta, aspiring metal singer, will tear into Foreigner's "Jukebox Hero," or Alec Baldwin and Russell Brand and the rest of the cast blast "I Love Rock 'n' Roll," and director Alan Shankman (Hairspray) will go for some cheap laugh and utterly undercut the moment.

Maybe the music, the fashion, the whole rapacious testosterone vibe of that spandex, eye-shadow, poodle-haired era is laughable. But it's one thing to poke fun at something, quite another to attack it with utter contempt. That's the feel here.

Would you let a guy who hates corn and corny film "Oklahoma!"?

Rock of Ages, which discards quite a bit of the book of the stage musical it's based on, swirls around Jaxx, who staggers onstage for his farewell show at the Sunset Strip's famed "Bourbon Room," and prepares to launch a solo career. Sherrie, a new waitress and would-be singer (Julianne Hough), and bartender-guitarist Drew (Boneta) dream of living the rock-god life Stacee leads.

But it's 1987, and that world is about to change. The film says it's rap and boy bands that will kill the moussed music (musicians say it was grunge that did them in).

The Bourbon Room is under pressure from the mayor's wife (Catherine Zeta-Jones), a cross between Anita Bryant and Tipper Gore, who pledges to "clean up Sunset Strip" and "take Satan off our streets." She and her fellow Mothers Against Drunk Rockers then kick into a rowdy-raunchy rendition of "Hit Me With Your Best Shot."

"The spotlight doesn't just light them up. It's makes us disappear," another waitress warns Sherrie.

Thus, does Miss Innocent from Oklahoma wind up in a strip club run by Mary J. Blige, who delivers what passes for a show-stopper here - "Any Way You Want it," with a choreographed crew of VERY athletic pole dancers behind her.

You will be amazed at the actors who take on singing, often for the first time onscreen (Baldwin, Malin Akerman as a sexy Rolling Stone reporter, Paul Giamatti as Stacee's sleazy manager) and don't embarrass themselves. Cruise, in particular, is a demented delight to watch, all jewel-encrusted dragon's head codpiece, buttless chaps and self-serious drunken swagger.

But the songs, with a few exceptions, lack the urgency of the original renditions. The leads (Hough and Boneta) are so bland and thin-voiced that they seem out of step with 1987, even if they're exactly what we get from pop stars in our Auto-tune era.

You will be stunned at how leg-spreadingly crude (fitting the MTV of the times, and the music) a PG-13 movie can be. Miami was nicely dressed down for a film fantasy version of Sunset Strip in the '80s - vulgar leather and neon and sports cars and muggers.

But seriously, Brother Shankman, what's the point of making "I Love Rock 'n' Roll: The Musical," if you don't?