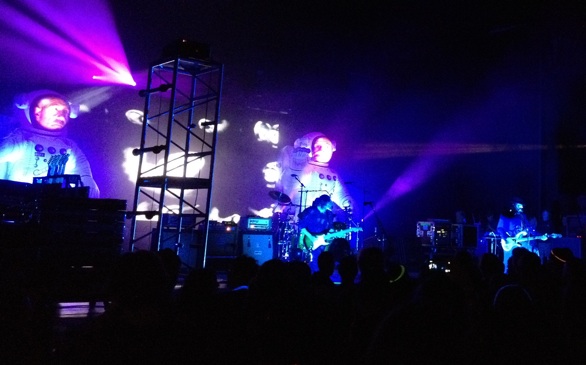 As bodies pinballed off each other in the mosh pit, a thundering chant stretched from the first to the last row at the Greek Theatre on a tepid night in June.

“I don’t know what you guys are talking about,” he jested in response.

The antithetical slogan has been one of those strange idiosyncrasies Primus has long lived by since its early days in the mid-1980s.

It’s why the Northern California alt-rockers belong in a class of their own. It’s also why they have managed to remain relevant in an ever-changing industry. But it’s really because of what Claypool brings to the table.

While he isn’t getting any younger, you wouldn’t know it from the way he manipulates a bass guitar. Just watch him, and you’ll understand how few can do what Claypool can as he nears the age of 50.

It was evident from the moment he stepped on stage for Primus’ first-ever show at the historic amphitheater amid a 25-year run that has included seven different drummers, two guitarists and one certain bassist-frontman.

Primus, after all, has always been Claypool’s brainchild — a project he pursued after Metallica turned down his offer to replace the late Cliff Burton.

And though Claypool’s vocal aptitude has never been something to write home about, his clever approach to rock music has united metal heads, jam-band junkies and funk fans alike.

For less than two hours in Hollywood, Claypool, guitarist Larry LaLonde and drummer Jay Lane covered the Primus catalog as best they could within the confines of a 15-song set list.

They busted out classics like “Wynona’s Big Brown Beaver,” “Jerry Was a Race Car Driver” and “My Name Is Mud,” sending the near-capacity crowd into a state of ecstasy on several occasions.

Yet equally impressive was the trio’s ability to engage the audience with material from its latest studio effort, Green Naugahyde, receiving as much applause for “Jilly’s on Smack” and “Eyes of the Squirrel” as other older favorites like “Groundhog’s Day” and “Mr. Krinkle” did.

Of course, the venue’s 11 p.m. curfew wasn’t ideal for either party involved, but that didn’t stop us in the end from heaving more “Primus praise” while we walked out.