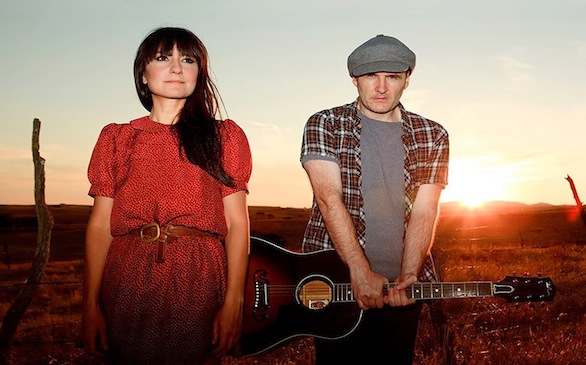 The beautiful European nation of Spain boasts the best soccer team, one of the most prominent cultures, delicious food, attractive men and women, and a plethora of musical talents. This is where Amaral comes in to play.

"We met in the 90s," Eva Amaral says. "I played the drums for another band, and Juan was part of another one...We began to talk and discuss the things we had in common in terms of music, and that was the beginning of a wonderful friendship that led to us doing music."

They got together, moved to Madrid and signed a record deal --and the rest has been history for this musical act that has and continues to shine over the years.

"We have done music as a necessity so that we could express ourselves," Eva Amaral says of the inspiration behind their artistic musical compositions. "We have used many things as inspiration: cinema, friends, literature..."

The band has a pop rock style, which is filled with resonating synthesizers and infectious Latin fusions. However, their latest release, titled Hacia Lo Salvaje (Into The Wild), is slightly different. This album consists of 12 tracks that are poetic by nature, precisely because of the way the lyrics are written and portrayed.

"We recorded this album in Madrid during the summer of [2011]," Eva Amaral says, adding that it was mixed in New York. "This is a disc where we wanted to reflect, in a more transparent manner, the direct sound of the band --the bass, drums, guitars and vocals."

Eva Amaral's voice is rather unique; her Spanish accent while singing captivates one's ears completely, and she perfectly delivers ideal vocals for each of the songs. "Robin Hood," for example, sounds superb, no easy feat given that it is mostly acoustic.

"It talks about deep sentiments," says the goreous Eva Amaral.

"Robin Hood" sucks you in and keeps you in the entire time it plays -- it's definitely the best song off the album.

Then there is "Antártida," a tune that is instrumentally powerful, with lyrics that leave one speechless to the extent of being perplexed, but in a good way --which elevates one's spirit and even ignites positive energy in the blood cells.

"'Antártida' is a song that very well resumes the sensation of attempting to go somewhere that scares you," Eva Amaral explains. "We based it off a legend that teaches us to never give up."

Whether already a fan or not, Amaral is a must listen-to, and now that they are touring the U.S. and coming to Los Angeles, their show is expected to provide musical wonders.

"We have a grand desire to come play there," Eva Amaral says of their upcoming show at the Roxy. "We are very excited to re-unite with the public [of Los Angeles] - also because we are performing at a place that is a part of our musical mythology, like Roxy is."