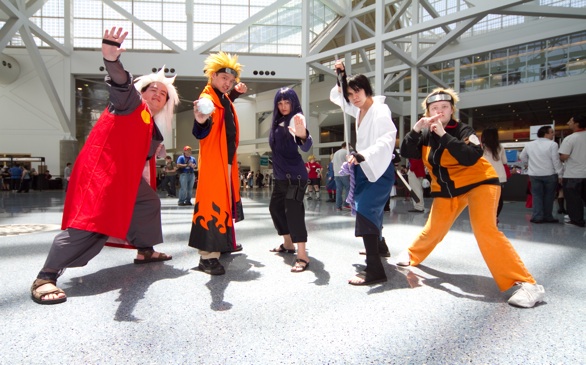 Attendees dress up as their favorite characters for the annual convention.
(Credit: Asa Mathat)

The Anime Expo is making its annual return to the Los Angeles Convention Center on June 29, and it will run through July 2. As North America’s largest anime and manga convention, some of the industry’s biggest players will be present to interact with the fans. This is a unique and rare opportunity for local anime enthusiasts to immerse themselves in the industry, which is based in Japan.

There’s no shortage of things to do at the Expo, with available activities such as meeting artists, costume contests, video game competitions, karaoke, exclusive screenings and the fan-favorite, the Masquerade. In honor of this massive party, attendees create elaborate costumes and subsequently put on a show in front of thousands of people. It is one of the most distinctive features of the Anime Expo, and it gives the fans a real opportunity to express their love for anime and manga.

What sets the Expo apart from other anime conventions is events like the Masquerade, which aim to better the average fan’s experience through non-traditional means. Another unique highlight of the expo is the Anime Singled Out show, which pits audience members against each other for a chance to win a dream girl or guy. There is also an AMV contest in which amateur editors combine scenes of animation with the music of their choice. The sources of animation can come from original OVAs, television, video games and movies. There are multiple categories such as action/adventure, comedy, drama, pro and fun. Awards are given based on a combination of popular vote and Anime Expo staff vote. Some of the awards include Best of Show, Creator’s Favorite and AX Staff Favorite. These types of events bring the fans and industry members together by means that go past simple conferences and meet-and-greets.

In addition to these fun events, there are a plethora of exhibits to explore that offer everything that a fan could possibly want. Toys, art, manga, gifts, models and even certain types of food are on display for visitors to see.

There are also booths set up throughout the Convention Center that feature companies such as Digital Manga Inc., which works to build corporate and cultural connections between Japan and the West. It works in licensing, importation and distribution of manga and anime in the United States. Only at an expo as large as this can companies such as Digital Manga Inc. get face time with fans.

What attendees will probably be most excited for are the guest speakers that will be making presentations during the convention. From voice actors to musicians, there is a diverse array of guests that fans will be clamoring to go see. Notably, Steve Blum, who voiced Spike Spiegel from “Cowboy Bebop,” will be making an appearance, as well as Japanese superstar LiSA.

Overall, those attending the Anime Expo are sure to have a fulfilling experience, whether they partake in the range of activities, or just go to explore all the booths and exhibits.

The Anime Expo 2012 will be taking place June 29-July 2 at the Los Angeles Convention Center, 1201 S. Figueroa St., Los Angeles. For more information and to register to attend, visit anime-expo.org.