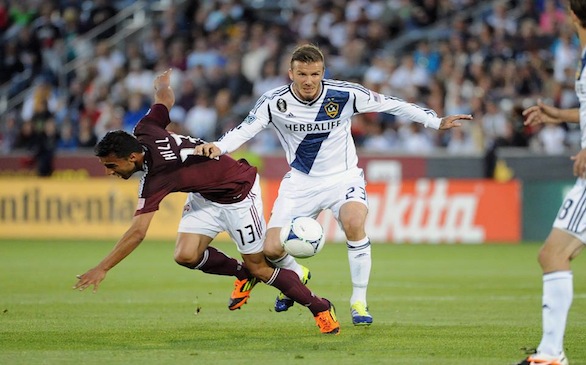 Behind a goal from left back Todd Dunivant, the Los Angeles Galaxy earned a much-needed 1-0 victory over the visiting Portland Timbers on Father's Day at The Home Depot Center in Carson.

Before nearly 21,000 fanatics, L.A. achieved its first shutout win of the year. Their record now improves to 4-8-2, good enough for 14 points and seventh place in the Western Conference thus far.

“We just have to build on it, it’s as simple as that," English midfielder David Beckham says of the win. "Last season we played a lot of games like this where we won 1-0, and we kept the other team shutout. We need more performances like this, and we’re capable of it. Hopefully this will be our springboard.”

Dunivant's score arrived in the second half at the 61st minute of play, when Beckham placed a right-footed pass off a corner kick from the left flank. The ball found Dunivant's soaring head, which redirected the leather towards the net and recorded his first score since May of 2010.

“David [Beckham] obviously serves an incredible set piece, and he put the ball in the back post. We kind of talked about it at half time that we had a few in the front post, and I said to try the back post. [I] found a little space back there and I was able to net it home,” Dunivant tells reporters after the game.

But the story of the match lies with the Galaxy defense, which defended solidly and did not allow the Timbers to penetrate their net in Josh Saunders's return. Saunders's performance became pivotal, as he provided integral diving saves to help keep Portland scoreless. He made an unbelievable face stop and another diving save with his right hand.

"[I] do what it takes. Sometimes that gets you back into the game, and it was timely,” Saunders says of his save with his face.

This was Saunders's first game since April 21 due to a period of personal leave.

"He’s a very likable person," Galaxy head coach Bruce Arena said during the post-game press conference. "Obviously, he dealt with some difficult personal experiences, but the team supported him all the way. He was really happy to get back. Having an experienced goalkeeper in the goal, definitely helps."

Added team captain Landon Donovan, "Josh was great. His attitude since he’s been back has been great. He looks like he has some clarity in life. He looks humble, he looks calm, and I thought he was excellent tonight."

In the first half, Portland seemed to have possession of the ball quite often, but could not produce scores. Meanwhile, the Galaxy saw numerous scoring attempts but could not convert either. Donovan almost delivered a powerful, yet incredible right-footed goal from about 40 yards out. Unfortunately, Donovan's potent shot hit the right post and rebounded onto the field.