Meital Dohan is Taking Over America 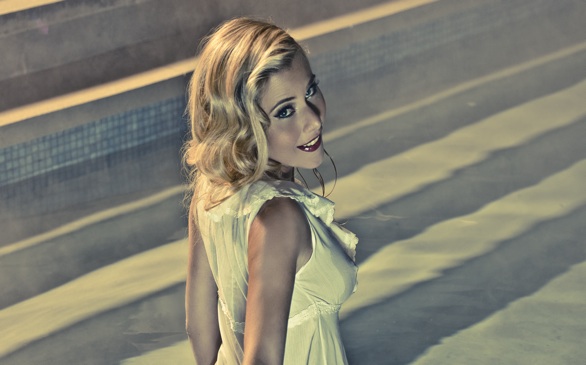 Dohan got her big break in the U.S. playing Yael Hoffman on “Weeds.”
(Credit: James Hickey)

She’s a talented actress, singer and comedian, but one thing Israeli-born Meital Dohan is not is shy. For her latest video for the dance track “Yummy,” Dohan dons boxing gloves – and nothing else – as she makes her way through her day.

“It was fun; I wasn’t scared at all!” she says of shooting her video in the nude.

Dohan, who is probably best known for her role as Andy’s love interest Yael on Showtime’s “Weeds,” is currently working on an electro-pop album entitled I’m In Hate With Love, due out this fall. She has been collaborating on the record with mega hip-hop producer Che Pope, who has previously worked with Lauryn Hill, Dr. Dre and Eminem –whom she would love to collaborate with one day.

“There are tons of artists that I love and admire, that I’d love to work with: Kanye West, Eminem, Timbaland, Jay-Z…”

As for her current album, Dohan says it will be a mix of different vibes.

The MTV Buzzworthy artist’s latest single is the infectious “On Ya,” which features hip-hop star Sean Kingston.

“The inspiration [for the song] is kind of like, we’re all in the race trying to be number one, and I’m just trying to say, let’s just chill,” she explains. “We’re already good as we are. Let’s just chill and have some fun!”

It seems Dohan should take a little bit of this advice herself: Between recording the album and working on a TV series and a couple of feature films, she admits that she barely has any downtime.

“My life is so hectic!” she says. “I finally found two days to go on a weekend to St. Barts; I love St. Barts, but unfortunately I don’t have the pleasure to spend a lot of time and take a lot of days off.”

Dohan began acting in Israel at a young age, and gained acclaim for her work in the films God’s Sandbox and Giraffes, as well as her role as principal star in the Israeli Emmy Award-winning “Ugliest Esti,” the Israeli version of “Ugly Betty.” She eventually moved her career to the U.S. in 2005.

“I was invited to a film festival in New York, and I met a woman who knew my work from Israel and she wanted me to act in a theater show,” she explains. “Then I got the show ‘Weeds’ afterwards, so things kind of led one thing to another.”

Dohan looks back on her time working on “Weeds” fondly.

“It was amazing!” she says. “The show was so much fun, and everyone on the show is really funny. It was really a pure pleasure.”

The confident blonde found the transition from acting to singing to be a natural one, and channels experiences from one into the other.

“I definitely think that my whole approach toward music definitely was influenced by my acting,” she explains. “I’m definitely combining my comedic skills into everything that I do, and because I’ve been an actress my whole life. I do the singing part with a little bit of a wink. It’s more about overall performance.”

As for what’s next for the singer/actress, Dohan is leaving the planning to a higher power.

“I don’t think my goal is relevant,” she says. “I think the big force has a bigger goal for us, and we just need to follow the path.”