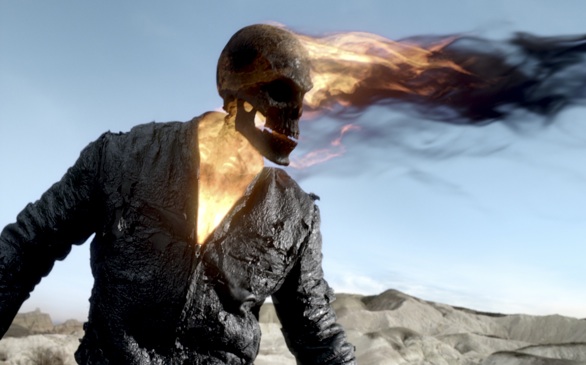 Ghost Rider: Spirit of Vengeance is now on DVD and Blu-ray.
(Credit: Courtesy of Columbia Pictures)

The Majors: Nicolas Cage returns as one of comics’ darkest heroes in Ghost Rider: Spirit of Vengeance. The sequel finds Johnny Blaze enlisted by a secret Christian sect to save a young boy from none other than the Prince of Darkness.

Funny Business: Mumblecore auteurs the Duplass Brothers direct the comedy Jeff, Who Lives at Home. Nobody plays a lovable slacker like Jason Segel, and he’s in fine form in this lighthearted gem as a guy in search of the meaning of life and the solution to his family’s troubles. Ed Helms and Susan Sarandon co-star.

Director David Wain brings his singular style of absurd humor as he re-teams with long-time star Paul Rudd in Wanderlust. Rudd plays a Manhattan hotshot who loses his job and winds up at an eccentric hippie community with his wife (Jennifer Aniston). Alan Alda and Justin Theroux co-star.

The Idiotbox: One of America’s funniest comedians-turned-TV auteur, Louie C.K., returns with more hilarious self-loathing as an out-of-shape single dad trying to figure out his life and survive as a comic in “Louie:” Season 2.

A convicted conman and an FBI agent team up to nab the smartest criminals in exchange for clemency in “White Collar:” Season 3.

Comedian Sarah Silverman’s trademark chipper delivery of the most deranged lines is in pure unadulterated form in “The Sarah Silverman Program:” The Complete Series. This box set of one of TV’s weirdest shows contains all three seasons and tons of extras.

Paying tribute to the absurdities of the internet and viral video stars, “Tosh.0:” Hoodies is the first collection of lambasting from comedian Daniel Tosh. Dave Attell and Bree Olson guest star.

From the Vault: The Three Stooges: The Ultimate Collection is an aptly named massive set for the serious Moe, Larry and Curly fan. This decades-spanning set features 190 shorts, plus three discs of unreleased content, including fascinating looks at the early work of Curly’s successors and two feature length films making their DVD debuts.

Foreign Fare: Hong Kong’s Accident is an intense paranoid crime thriller about an ingenious hit man who stages elaborate “accidents” to dispose of targets, but soon begins to suspect that he may be the next victim.

Steven Spielberg directed the adaptation of J.G. Ballard’s Empire of the Sun, about an English boy who grows up in a Japanese prison camp. Based on Ballard’s own childhood, the film stars a young Christian Bale and John Malkovich.

Keep your awesome ‘80s action-a-thon going as Chuck Norris racks up a body count in the genre classics Delta Force and Missing In Action 1 and 2.