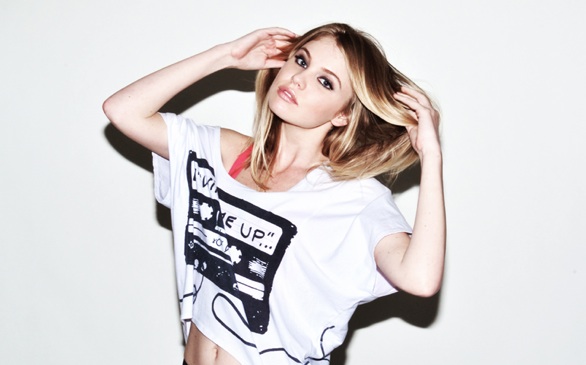 DANIELLE ATE THE SANDWICH: LIKE A KING
It’s a lot more fun to think of L.A.-based folk singer Danielle Anderson as Danielle Ate the Sandwich, the name she records and performs under, and contrary to her earlier recordings, there are additional ingredients in her latest recipe, Like a King. Just released on the Youngest Daughter label, Like a King finds Danielle Ate the Sandwich working with guest players for the first time, including vibraphonist Greg Tanner Harris from the Vibes Quintet and trumpet player Ron Miles from Elvis Costello’s group of sidemen. “My songs are small and simple, and the players on this record helped me bring them to life,” says Danielle. “It’s a newer thing to me to share my space. I really appreciate that they never ran away with the songs. They always rode their bikes on the sidewalk in front of the house.” Danielle Ate the Sandwich plays live at the Hotel Café on July 21 and at the Center for the Arts the following day.

AUDREY NAPOLEON: ORNAMENTAL EGOS
Most would refer to Audrey Napoleon’s music as electro or house, but she prefers to call it “underground pop.” You’ll soon have the opportunity to decide for yourself as Napoleon’s new six-song E.P., Ornamental Egos, is scheduled to drop on July 24. Napoleon has also teamed with director Nicole McDonald to make a film, which has been chopped up into four chapters that you can view individually, or see the entire film together as a video accompaniment to the E.P.’s first single, “Poison,” out now. The L.A.-based DJ/producer also performs once a month at Marquee in Las Vegas, but if you’d like to take a shorter road trip to see her, she’s set to appear at the Identity Festival in Chula Vista on August 18.

KAYSLEE: GIRLS' NIGHT IN
Kayslee is a 21-year-old actress, model and singer/songwriter from San Diego, whose love for performing developed early. Kayslee appeared on stage for the first time at age 5, and at 7 had landed her first national television commercial. By the time she was 16, Kayslee had appeared in over 25 commercials and was well established as a respected print model, working on campaigns for the likes of Billabong and Levi’s. She’s had a slew of superstar friends and boyfriends, and now people are saying “move over Katy Perry” as Kayslee prepares to release a new E.P. entitled Girls' Night In on July 10. Don’t think it’s all gone to her head; Kayslee is more down-to-earth than you might think. “It’s a blessing and I thank God every day,” says the budding pop idol.

A LITTLE TIME FOR THE BOYS
Huntington Beach punk legends the Offspring have announced June 26 as the release date for their ninth album, a Columbia Records title called Days Go By. A couple sample song titles from the album are “Cruising California (Bumpin’ in My Trunk)” and “Slim Pickens Does the Right Thing and Rides the Bomb to Hell,” a title that will make complete sense to you if you’ve ever seen the film Dr. Strangelove. And a big hooray for Five Finger Death Punch, who have signed on to help promote the National Suicide Prevention Lifeline. If you go to see the band August 28 at the Hollywood Palladium, $1 of your ticket cost will be donated to the cause.