WNBA's Candace Parker Aims for Olympic Gold She Can Relish 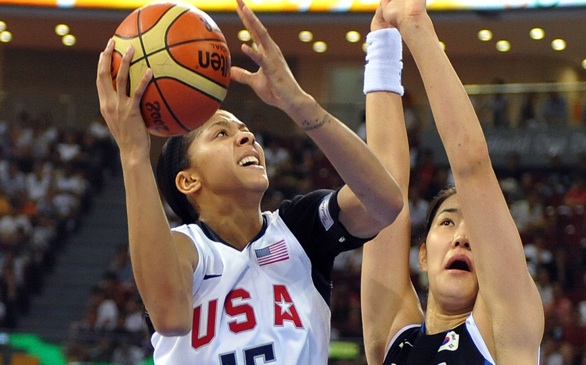 The injuries have stacked up for Candace Parker, a human pin cushion the last few years.

Why, then, would she risk her health by signing up for an extra four weeks of basketball in Turkey and England, not long before her WNBA season ends and her annual stint in a Russian league begins?

Because one of her destinations is London.

Parker doesn’t see knee injuries and shoulder dislocations as much as she sees five-ring symbols and another tour with Team USA after its dominant run four years ago in Beijing.

“Winning the Olympic gold medal the last time was very special, but I don’t think I truly grasped what we were doing at the time,” Parker said. “I had just graduated college, we won the national championship, I jumped into the WNBA . . . Everything was going so fast. The second time around, I’m going to stop and smell the roses. This might be my last time.”

Parker speaks like a 16-year veteran, not a 26-year-old, but it’s understandable given her past.

The Sparks forward pulled off a rare double in 2008, winning the WNBA most-valuable-player and rookie-of-the-year awards after graduating from Tennessee.

The medical charts have almost gotten the best of her since then. Parker played in only 27 of 68 regular-season games during a two-year span.

She collapsed on the court last June after taking a defensive rebound and making contact with a New York player. The torn cartilage in her right knee cost her almost seven weeks.

She was injured a year before that while taking a rebound against Minnesota, walking off the court in agony and holding her left shoulder. She sustained a dislocation in the same shoulder she injured numerous times dating to her senior season at Tennessee. This time, she missed the rest of the WNBA season because of surgery.

The injury tree has pretty deep roots for Parker, who suffered through a torn ACL in her left knee in a 2003 AAU game and then needed two operations the following year after the knee swelled during her last year of high school. She sat out her entire freshman season at Tennessee.

Yes, the frequent questions about her injury history bother her.

“My answer nowadays is when I’m on the court, I feel healthy. It’s something I can’t control,” she said. “I’m trying to just take care of my body and make sure I can get some more miles out of these legs.”

She seemed fine in an exhibition last month against China, leading Team USA with 25 minutes and scoring 10 points in a 100-62 victory.

More recently, Parker had 16 points, 13 rebounds and three blocked shots for the Sparks in a 67-65 victory over Seattle last week.

Parker will join the U.S. team in a month for a quick training camp in Washington, followed by an exhibition game in England and then a warm-up tournament in Turkey before returning to England to start the Olympics on July 28.

Parker, 6 feet 4, will be counted on to do a little bit of everything. She’s listed as a forward, center and guard for a team with incredibly high expectations that accompany a 33-game Olympic winning streak.

It will be a shocker only if the United States doesn’t win a fifth consecutive gold medal. Team USA went 5-0 in preliminary play in the Beijing Olympics, winning by an average of 43 points. The United States beat Australia in the gold-medal game, 93-65.

“It’s more about competing against ourselves,” Parker said. “We know how talented the U.S. is. A lot of players could come in and fill our shoes. It’s more about proving you’re worthy of being on the team.”

Parker is used to ever-increasing pressure. She was the first Illinois high school player to dunk in a girls’ game. She was a 15-year-old sophomore at the time.

The level of competition will obviously be higher in London. A second gold medal is her goal, regardless of her past injuries.

“I’m going to stop and really appreciate the experience more,” she says.