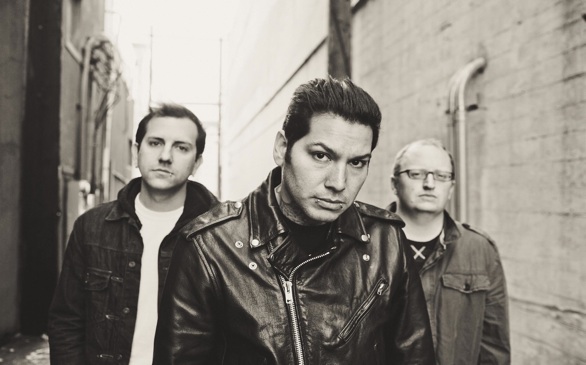 The band has sold 2.5 million records over a 20-year career.
(Credit: facebook.com)

You would think that after 20 years of going hard, the punk-rock trio, MxPx would show signs of slowing down; instead they are kicking it up a notch by turning their 20 year anniversary shows into a full-blown “20th Anniversary Tour” and launching a new album. The band originally planned on celebrating their anniversary with a string of shows throughout the West Coast, but now they will include shows in New York and Philadelphia as well. Lead singer Mike Herrera recently chatted with Campus Circle about the anniversary tour, their two-decade long career, their new album Plans Within Plans (MRI/Rock City Recording Company) and the future of MxPx.

There has been much criticism leveled against MxPx over the years, but then again, any band that stands the test of time is bound to receive criticism, and MxPx is no exception. Everything from the band’s Christian background to Mike Herrera’s seemingly juvenile songwriting has been the topic of debate among punk rock fanatics. Nevertheless, the band has managed to create a new, more mature album, while maintaining their libertine punk essence.

“This is more of a serious album,” says Herrera of their latest release. “I know we’ve always been known as a pop-punk band, but we’ve gotten a little more serious over the years. It’s not as young sounding.”

That may be true of the lyrics, but the catchy punk riffs with pop melodies that we are well acquainted with are still very much there. According to Herrera, this album sounds like what MxPx is supposed to sound like. The classic feel can easily be attributed to its production: this time around the punk veteran decided to produce the album himself.

“It’s always great to work with producers: They always have great ideas, but they are different ideas,” explains Herrera. “If we wanted to produce something different than what we were, we’d have continued to work with other producers. Instead, we just nailed down what it is we do, and tried to make it better.”

The band that ultimately broke out of the underground scene in 1996 with their now classic third L.P., Life in General, has been working hard for two decades. Their progression since their first album is subtle, but if you pay attention, quite evident. The lyrics, for example, have moved from juvenile to thoughtful and inspirational. Nonetheless, the group is not about to shock its fans with a completely different sound; they know their formula works, and they don’t plan to stray from it.

“There are rules to MxPx,” explains the songwriter. “When we experiment, people don’t like it as much, so with this new album I thought why bother; I’m just going to do what we do. We’ll do some hardcore stuff, some pop type melodic fast stuff and some anthemic uplifting songs because that’s what we do.”

In short, if it isn’t broken, you don’t need to fix it.

MxPx is one of the few bands that have lasted this long, and have continued to perform and stay viable through the years in an ever-changing industry, where one day you’re in and the next day you’re out.

Hererra is well aware of this, and is as thankful as he is surprised that they have survived this long without having to reinvent themselves or drastically change their sound.

“It’s pretty crazy,” explains the band’s front man. “Some artists can reinvent themselves and it goes well for them, but you also see a lot of growing pains. For example, someone as iconic as Bob Dylan ditched the acoustic guitar and picked up an electric guitar and a backing band, and people were not digging that. He was a huge artist and he reinvented himself, but it took a while.”

At the same time, Herrera acknowledges that he is aware of the style and sound that his fans like and expect of MxPx. He tries to find a middle ground, where he can give them the characteristic sound and still be honest with the songs he writes. He leaves the heavy experimenting for his various other projects.

“I guess that’s why I started a few different bands, so I can have the freedom to write what I want,” says the “Chick Magnet” singer. “Obviously, if I’m doing MxPx you can expect to know what it’s going to sound like.”

What they continue to do seems to be working, given that the band has sold 2.5 million records worldwide.

“You probably won’t hear too much reggae,” he chuckles. “I wouldn’t want people to be like, ‘What happened?!’”

Plans Within Plans (which is devoid of reggae) is exactly what fans of pop-punk are hoping for. New enthusiasts will bask in the catchy and poppy tunes, while older fans can enjoy the hardcore sound with the more thought-provoking lyricism.

The album begins with “Aces Up.” This classic MxPx opener enters with an upbeat tempo and lyrics that tell a story about dealing with life’s hardships. The message is wrapped in an inspirational metaphor that tells the listener to deal the cards and hope that “when you play your hand, put on your poker faces because life just don’t deal aces.”

“Screw Loose” is a return to the hardcore sound MxPx fans have loved since the ‘90s. It’s a 1 minute 7 second fast and furious punk rock track with bitchin’ guitar solos. Fans of songs like “Get Me Out” off the album Panic will feel right at home here.

“Far Away” singes your soul, and gets you ceaselessly convulsing till the last note, and “Best of Times” is a tune drenched in melodramatic arrangements and backing vocals that give it a more boisterous feel.

The new album is an ode to everything MxPx past and present, and the ideal complement to the celebration of their 20-year career.

For a full list of tour dates and ticket info, visit mxpx.com/tour.