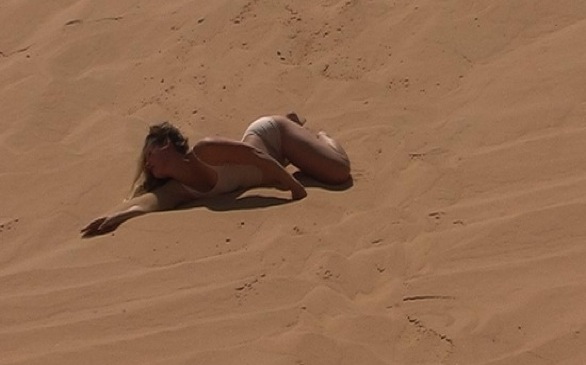 The 3rd annual Hollywood Fringe Festival is 11 straight days of early morning, mid-day, primetime and late night shows that add up to over 200 productions of theater, music, dance, film, comedy, tragedy and the just plain weird.

Since it’s humanly impossible to see it all, I took a more geographical approach: camping out at one venue a day, and seeing as much as I could before my eyes and head needed to rest.

What’s distinct about Fringe is that it gives creators opportunities to do the unusual. You can present a 20-minute dream sequence, workshop some dance, or remount a full-scale classic like Sam Shepard’s “Fool For Love” or Arthur Miller’s “The Crucible,” or tell a new, bold, un-market-tested story.

I think the key component of my Fringe experience is the idea of theater being about storytelling — and not the average made-for-primetime stories that make it to TV, film and Broadway — weird stories, personal stories; love and death, but with a tinge of fringe. Here, veterans and newbies take chances on presenting works that are born of a need to tell a tale, and they tell these stories through a variety of methods.

Storytelling methods included very personal spoken monologues, exhibited in “Voices in My Head” by veteran voiceover actor Bill Ratner, which recounts the author’s youthful experiences of loss and growth into one of the country’s most heard voices. Another show utilizing the monologue was the more theatrical presentation of John Sinner’s “If Water Were Present it Would Be Called Drowning,” which recounts a mother and wife’s slow demise into nothingness. Considered one of the best new examples of surrealist theater, the work is essentially a one-woman show performed with an open generosity and bravery by Betsy Moore, who straddles laundry and the kitchen table in a search for satisfaction.

More one-acts bring diabolical tales, as in the drug-tinged, Willy Wonka-ness of “Nostalgium,” where two neighbors make a deathly pact to find happiness, or the sinister evangelicals of Michael Etzrodt’s “John 10:10,” in which the rapid-fire dialogue, dripping in subversive humor, is funnier than one would think could be found in such a tragic and dark tale of swindling.

Religion seems to be the voice in the head of a lot of the writers this year, as is the quest for love lost and found, which is mentioned in about 50 percent of the program synopses.

Existential crises abound, as in the dream sequence of “BoxWindowDoor,” where a woman roams a stage of sculptural remains to recount and resist memories of a death. The much more sexy and stylized “The Black Glass” almost mocks the corporate greed of a modern capitalist man tormented by his conscious, who is embodied on stage, clothed in devilish red and black and accompanied by two women.

The Fringe Festival makes room for movement, music and film as well. One movement piece imported from San Diego is the collaborative dance work “FIVE,” which presents generally strong choreography that is unfortunately undermined by direction, which divides it into five stories that are explained to the audience before the piece begins. In this case, it would have been best to let the dance speak for itself –it felt like the creators didn’t trust it or the audience enough to "get it." A particularly beautiful moment is the dance film at end of the program, which features a pregnant woman moving her way through sand dunes.

It’s not too late to witness these one-of-a-kind performances for yourself! Truthfully, there is no way to explain what you should go see, but there is a way to see what others thought of what they saw: The Fringe website has a review tab on each production’s page that offers audience feedback, and, if you need more references, the critical website Bitter Lemons has created a “FringeMeter” that is helpful in sussing out what to see.