Looking for an All-Star: Matt Kemp Leads NL in Votes 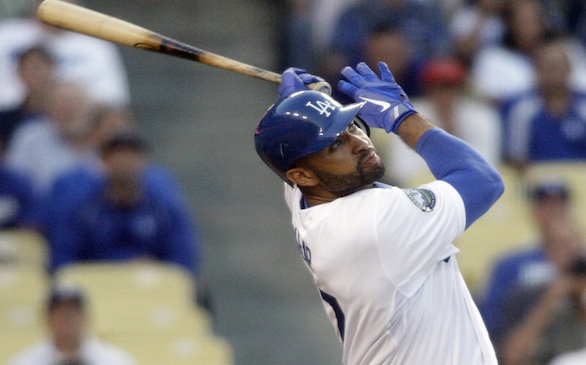 If it were up to Matt Kemp and the voting public, Kemp would be starting in this year’s All-Star Game in Kansas City. Despite missing the last month and a half because of a hamstring injury, the Dodger centerfielder leads the league in All-Star ballot votes with over three million tallied so far.

Kemp, who started the season in fantastic fashion -- batting .355 with 12 home runs and 28 RBIs in 36 games played -- is not scheduled to return from the disabled list until right around the All-Star break. He has indicated he would like to play in the All-Star Game, and also have a chance to redeem himself in the Home Run Derby. Last season, he hit an embarrassingly low number of balls over the fence: a mere two. However, given Kemp’s enthusiasm, one can imagine that manager Don Mattingly is none-too-thrilled about letting his star slugger play in a game that is largely for show while the Dodgers have to attend to the more serious business of fighting for a postseason contention. The Dodgers have been hurting for offense recently, and Matt Kemp’s bat is sorely missed.

So if not Kemp, who then would represent the Dodgers this year in the midseason classic? Right-fielder Andre Ethier would seem the logical choice. Even as he has struggled offensively of late, he still leads the league in RBIs with 55, and has been good about making enough dazzling defensive plays to take some of the notice away from his recent poor performance at the plate.

And then there are the unexpected contenders, each with compelling stories. Left hander Chris Capuano, with his 8-2 record and 2.71 ERA, has emerged as a surprise ace in the rotation. If elected, it would be Capuano’s second appearance in an All-Star Game. His first came in 2006 when he was playing with the Milwaukee Brewers. His return would have the added sweetness of coming after his full recovery from Tommy John surgery in 2008.

Another All-Star possibility is A.J. Ellis. The Dodgers' regularly starting catcher has been a wonderful surprise during the first half of the season. Currently batting at .292, he has come through in a number of clutch situations and has provided stellar defense behind the plate. Having thrown out 40 percent of would-be base-stealers, he ranks among the top in the league in this area. It would be a good story for the 32-year-old catcher, who is in his first season playing every day, and for years was dismissed as a back-up catcher.

Dodger closer Kenley Jansen stands an outside chance as well. Posting a .251 ERA, the hard-throwing right-handed pitcher has converted 11 of 14 save opportunities. His story is unique in that he was drafted as a catcher, and was only “discovered” as a pitcher when scouts learned of his powerful throwing arm.

Of course, missing from this list is reigning Cy Young winner Clayton Kershaw. Even as he sports a respectable 5-3 record and 2.80 ERA, Kershaw’s performance falls shy of getting the All-Star treatment. He was, of course, expected to be the Dodgers’ undisputed ace after coming off of last season, where he went 12-1 after the All-Star break. There has been speculation about a condition in his left foot (the one he pushes off from in his delivery) known as plantar fasciitis that may be the cause of his unease on the mound, contributing to his drop from total domination, which defined last season.

Whoever represents the Dodgers in Kansas City this year, the game will likely attract attention from fans. The winner of the game determines which league gets home-field advantage for the World Series. As the Dodgers currently lead their division, some fans have already got it in their crazy heads that this just might be “the year.” That would of course mean home-field advantage when the Dodgers play … oh, I’m guessing the Yankees.