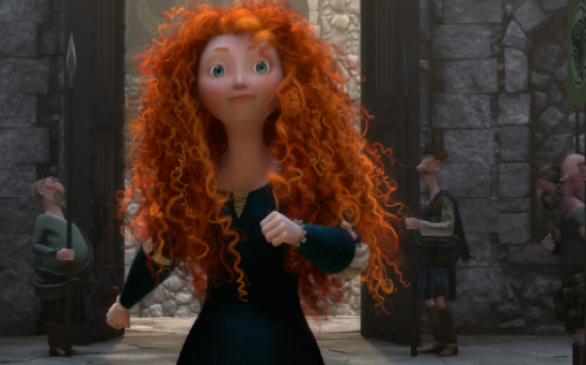 Don’t expect Pixar’s first take on the princess tale to be about finding Prince Charming. In the studio’s signature style, Brave does an excellent job of presenting a story in an unexpected way. The movie follows the journey of Princess Merida (“Boardwalk Empire’s” Kelly Macdonald), an unconventional royal who prefers adventure and shooting arrows to preparing herself to find a prince. Much to her mother, Queen Elinor’s (Emma Thompson), dismay Merida’s free spirit has caused much conflict with her princess duties, which the queen painstakingly has done her best to prepare her for. Both mother and daughter’s failure to communicate their good intentioned wishes with each other leads to the chain of events that sets the tale in motion.

Unlike most princess films, Brave has no formulaic villain, and when Merida asks for a spell from an elderly wood-carving witch in exchange for a piece of jewelry, she has no idea what she is in for. The witch has no ulterior motives, but may be better at carving wooden figures of bears instead of witchcraft, as Merida learns when a simple spell asking for her mother to “change” goes wrong.

Brave is more of an action-adventure film about changing fate and compromising with family than a typical fairytale romance. It’s not exactly the sort of Pixar fare that would appeal solely to children; it is definitely more geared for the parent and child of any age. The animated movie delves into the experiences families have during the transition teens have into adulthood. Sure, there are fun comedic moments courtesy of the triplet siblings and the unwitting father (King Fergus voiced by Billy Conolly), but Brave is the first Pixar film of its kind to stick to comedy that people can truly relate to.

In addition to the entertaining plot, Brave succeeds on many levels. There is so much heart in this movie, in true Pixar fashion; there are certainly a fair number of moments where you need to bust out the tissues. Another strong point is the use of 3D and the scenic Scotland setting, which is a wonder to behold as the backdrop to the story.

But be warned: This is definitely not a date movie! I recommend you see it with your mom or entire family. It’s truly a bonding experience that will bring you closer to your parents.