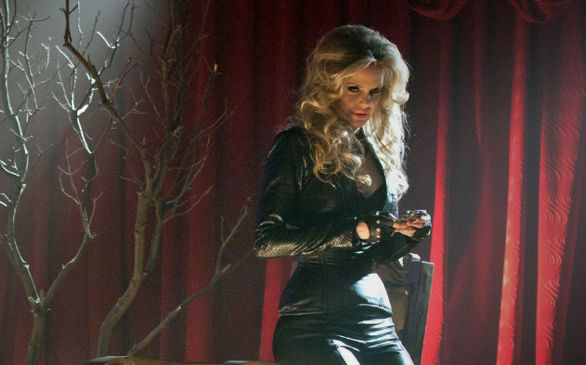 Back in Bon Temps this week we see Andy’s butt on Facebook, Sookie attacks Pam with her fairy powers and Lafayette sees the scary Brujo mask again. There’s also a development with the Tara situation, more Pam flashbacks and more mopey Jason. On the Authority’s side of things there’s sex, Sanguinistas and more sex.

After seeing goth Hoyt’s sad attempt to pick up a new vamp at Fangtasia, Pam remembers her dark days at the brothel. In a flashback, Eric pays her a visit shortly after saving her life, and though Pam offers him many of her best hookers, he says he came for her. But first Pam needs to take care of the blood-suckers who have been killing her girls, who turn out to be none other than Lorena and a young and reckless Bill. Eric and Bill have a heated argument that almost ends in the true death for Bill, but Eric spares him after Lorena begs for his life. They flee after apologizing to Eric and Pam. Then, after a good romp, Pam contemplates where her life is headed. She asks Eric to turn her so she can avoid the lonely STD-ridden death that awaits her. Eric declines, explaining the heavy responsibility of being a maker (which, by the way, Pam is not taking seriously as Tara’s maker in current times). But Pam isn’t taking no for an answer, and she slits her wrists declaring, “Let me walk the world with you, Mr. Northman, or watch me die.”

We finally find out where Jason’s sex-crazed days all started: He had an affair with his high school teacher, who he says taught him all he knows. After running into her at the grocery store, they end up back at her place where she tries to tell him what they did was wrong. Jason disagrees and proceeds to seduce her. Later, naked on the floor, Jason realizes that what they did was truly wrong, and leaves full of regret. That night, a horny Jessica pays a visit to tell Jason about her latest conquest, who smelled like “cotton candy and fresh-baked bread and fucking sex.” But for once Jason isn’t interested, and says he’s tired of being her “mechanical bull” and confesses, “I have a big fuckin’ hole inside of me that I’ve been filling with sex.” Jessica proves once again to be a great friend, and their blossoming relationship is really starting to pull at our heartstrings. Hopefully this is the end of the mopey Jason we’ve been seeing for the past few episodes.

Tara ends up at Sam’s after almost killing a helpless girl. He agrees to help her, and to not tell Lafayette or Sookie of her whereabouts. That doesn’t last long, thanks to Sookie’s handy-dandy mind-reading abilities (which Sam fails to avoid by thinking about her boobs). Sookie explains what happened and Sam understands, wondering if he should’ve done the same for his brother, having him turned instead of letting him die. Meanwhile, Alcide is looking for Debbie and confronts Sookie who denies seeing her. Alcide isn’t convinced, and unfortunately for Sookie, this is when Tara decides to emerge from the freezer she’s been sleeping in. Sookie tries to play dumb, but Tara isn’t having it. After baring her fangs she flees once again, this time to a tanning salon in an attempt to kill herself via tanning bed (ouch!). Pam senses Tara’s danger, and we assume that she’ll finally be a good maker and come to her rescue. Sookie finally confesses to Alcide that she killed Debbie. He then goes into Angry Alcide mode, which kind of resembles Bruce Banner trying not to turn into the Hulk. Though he’s sad about Debbie’s death, he seems to be more upset that Sookie lied to him. Alcide has always been there for Sookie, but this time we’re not so sure he’ll keep her secret. Back at Merlotte’s, Arlene gives Lafayette attitude, disgusted that he would turn his own family member into a vampire.

To the dismay of some chancellors (including the bratty little one), the Authority decides to take the deal with Bill and Eric: their lives in exchange for Russell Edgington. The Authority means business, and they strap Bill and Eric with stake-ridden harnesses. We also find out Salome is actually the Salome of the Bible –you know, the one who seduces her own stepfather and asks for the head of John the Baptist, though she denies it saying, “The human Bible is better than US Weekly.” Anyway, she turns her seductive skills on Bill and Eric in order to find out if they are Sanguinistas. They aren’t. Later, Eric haughtily tells Bill of his night with Salome, to which Bill smirks and replies, “You know what they say about gentlemen: they don’t brag about sloppy seconds.”

Nora is tortured and eventually confesses to being a Sanguinista in order to save Eric and avoid disclosing their sibling relationship. However, Salome already knows they are siblings, but so far she has chosen to keep that information to herself. After her double seduction, Salome reports back to Roman, who seems to be her lover as well as the Guardian. She tells him that Bill and Eric aren’t Sanguinistas because “Sanguinistas are unshakeable in their beliefs. Mr. Compton is still looking for something to believe in, and Mr. Northman only believes in himself.” She also asks Roman to back down from mainstreaming in fear of provoking a civil war. Roman refuses, believing that mainstreaming is working. He seems to be forgetting about the crazy bloodthirsty vampire by the name of Russell Edgington, not to mention the imminent rise of Lilith, who will most likely make an appearance by the end of the season. But they do now have Steve Newlin (the new Nan Flanagan) and his connection to the Fellowship of the Sun, which may prove useful. The question is if he can be trusted...and can Salome even be trusted?