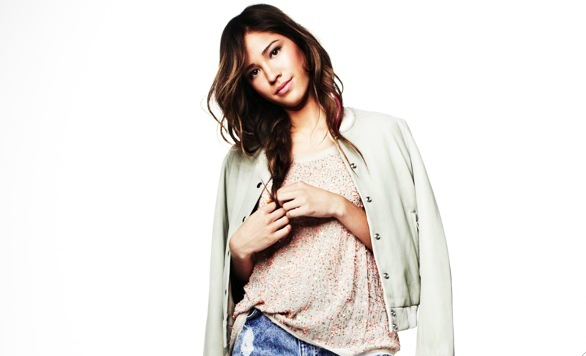 Kelsey Chow is an enigma. With her Chinese/English/Cherokee heritage, her description of her style icon Bianca Jagger sounds like the perfect description of herself: “She always looked so sweet, yet so exotic and so effortless” –a combination of disparate features that make her hard to pin down.

Chow keeps her air of mystery by constantly re-inventing herself in all aspects, be it her fashion choices or her next career move. You’d be hard-pressed to predict what she’s going to wear to an upcoming red carpet, or to determine where you’ll see her flex her acting muscles next.

This summer, you can see her in Columbia Pictures’ sure-to-be blockbuster The Amazing Spider-Man, in which she shares scenes with leading man Andrew Garfield. Her other projects are as radically different to the superhero movie as to each other: The Wine of Summer, a romantic indie flick, and Run, a parkour thriller. Then, as if all that’s not enough, she’s attending Columbia University, majoring not in theater or film or fashion, but global health. Did you get all of that?

Yet, despite her impressive resume and international beauty, when she speaks, sometimes you can hear inflections that reveal her South Carolinian, girl-next-door roots.

When I ask her why she got involved with this industry, she replies, first laughing, “I don’t know!” Then thoughtfully she backtracks, explaining, “I was a freshman in high school when I got an audition for ‘One Tree Hill.’ At that point, I had done community theater and two plays. I love to do this, but I never thought it was a possibility [to act professionally]. When the audition came into play, it was such a fast process, and I ended up booking it and being on the show for four years.”

This first major acting gig was an invaluable experience for Chow.

“I learned a lot from ‘One Tree Hill,’” she says. “It’s very special to me, and I am extremely grateful for it because it definitely kick-started this whole thing I call my career.”

Certainly, it’s this breezy, up-for-anything attitude that makes Chow so adaptable to this crazy thing that she calls her career.

Still, there’s something consistent about the often-unpredictable starlet: her role on Disney XD’s popular TV show “Pair of Kings,” which had its third season premiere on June 18. In it, she plays Mikayla, a character that she claims to identify with most out of all that she’s played.

She jokingly points out, “Most of my wardrobe consists of her clothes,” but continues, saying, “But also internally as well. We have the same values, [but] she’s a little bit cooler than me.”

What Chow seems to not have realized, but what I do quickly, is that she’s not only way cooler, but she’s more alike to all her other roles than she thinks. She had noted early on that “what’s really cool about the roles that I’ve played so far is that they are all pretty strong females. Actually, all of them [are] very strong individuals—very smart, perhaps a little stubborn. They try to make a stand for what they believe in.”

As for how the rising actress made the transition from the “TV family” she has on “Pair of Kings” to fast-paced movie sets, she shrugs the challenge off, saying, “You’re quick to adapt. It’s not too tricky, and I actually like having a different format than TV. It makes it interesting.”

With a thriving acting career, it seems surprising that the Disney star has made the time to go to college. However, Chow – being the strong, smart female like the roles she portrays – never thought twice about going to Columbia University, explaining that education has always been important to her, and confessing, “I really love school. I’m a nerd.” (There she goes again!)

As for why a major in global health of all things, she explains that she “wants to major in something slightly different, and get an experience outside the entertainment industry,” adding, “I think it’s very important to give back.”

That, too, is not hard to believe. Chow never manages to say anything negative about anything. When I asked her to name a fashion trend that she hates, she ruminates for a little and then only offers something that she likes: “Bow ties, I love them!”

As for her future aspirations, she names Annette Bening as someone she would like to work with, and in terms of career goals, simply wants “to have the opportunity to play roles that I love, and to be happy and for those around me to be happy.”

At the end of our chat, thinking maybe I finally got a clear sense of who this mysterious wild-child is, I ask her what her favorite thing to do on her downtime is, expecting some sort of adventurous hobby or a quirky craft. Instead, she answers quickly and simply: “Sit on the front porch with my best friends.”

Nope. Still as unpredictable and impossible to pin down as she was when we first began our conversation.

It’s no surprise that she is so difficult to easily categorize, as she stated early on, “I don’t want to be one-dimensional,” as part of the explanation of her global health major. Kelsey Chow couldn’t be one-dimensional if she tried.