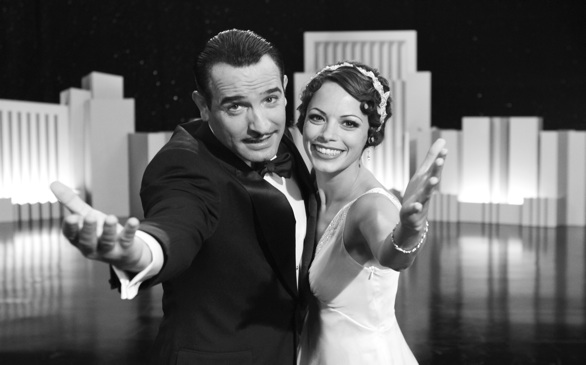 The Majors: Who would’ve thought silent film would ever be a hit again? The Artist, a jaunty homage to classic Hollywood, became just that. This beautifully shot charmer follows a silent screen star who falls from grace with the advent of talkies. It hits all the big emotional buttons of old time moviemaking, with some ingenious modern touches.

The Idiotbox: One of TV’s best dramas, “Damages:” Season 4 stars Glenn Close as a hotshot litigator and Rose Byrne as her one-time protégé in the cutthroat world of corporate law. John Goodman joins this season’s cast, as Patty and Ellen re-team for a wrongful death case involving a high-profile private military contractor.

Funny Business: Channing Tatum and Jonah Hill are two screw-up cops assigned to undercover detail in a high school in the comedic reboot of the ‘80s TV favorite, “21 Jump Street.” Now the two have to navigate the pitfalls of high school (again) while bringing down a drug ring. It’s surprisingly one of the better buddy action flicks in a while.

Under the Radar: A Necessary Death is a disquieting thriller about a young man who answers an ad placed by a documentary filmmaker to follow a suicidal individual as he plans and executes his own death. Writer-director Daniel Stamm (The Last Exorcism) made his directorial debut with this AFI Audience Award-winner.

Foreign Fare: Nominated for a Best Foreign Film Oscar, Belgium’s Bullhead follows a steroid-injecting cattle farmer who comes face to face with his past demons when he makes a deal with a mob cattle trader. Director Michaël R. Roskam makes an assured debut in this powerful crime drama.

Two women accidentally shoot a man and hit the road together only to fall in love in the crime comedy Joe  + Belle. Body disposal, car chases and all manner of misadventures ensue in Israel’s answer to Thelma and Louise.

From the Vault: The latest batch of TCM Greatest Classic Films collections each contain four classics from some of Hollywood’s biggest screen legends. The Humphrey Bogart Gangster Set includes The Petrified Forest, High Sierra, The Amazing Dr. Clitterhouse and All Through the Night. Joan Crawford’s set includes the masterful original version of James Cain’s Mildred Pierce, Humoresque, The Damned Don’t Cry and Possessed. Kirk Douglas’s set includes the scathing Hollywood portrait The Bad and the Beautiful, his Oscar-winning portrayal of Vincent van Gogh in Lust For Life, Young Man with A Horn and his autobiographical one-man show Before I Forget.

Blu Notes: One of the all-time classic thrillers, John Boorman’s Deliverance pits a group of city slickers (Jon Voight, Burt Reynolds) on a canoe trip against a gauntlet of peril in the Appalachian wilderness. If the infamous “squeal like a pig” scene is scaring you off, forget it. This is a top-notch nail-biter; you’ll never look at a banjo the same way again.