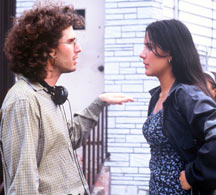 Maria Full of Grace — striking, suspenseful, unflinching — is one of the best films of 2004. Chronicling the journey of Maria, a Colombian girl who decides to become a "drug mule" by transporting pellets of heroin to the United States, the film works both as a coming-of-age story with unsentimental depth, and as a brilliant, unflinching study of the international drug trade. This, Americans, is how you get your drugs.

This remarkably assured Spanish-language feature is the debut film for L.A.-bred writer and director Joshua Marston. But how exactly can a young Berkeley grad tell a story so far beyond the realm of his personal experience?

Marston, who says he was "always interested in Colombia," elaborates: "I’ve been following the news there. I’ve been interested for a long time in doing something on the drug war. When I make films, I’m less interested in looking inward than at looking outward — to go out into the world, do research, talk to people and hear their stories.

"I wanted to humanize who a drug mule is. To take this newspaper headline and understand it from the inside," adds Marston over lunch at the Four Seasons Hotel in Beverly Hills, far removed from the squalor of Maria Full of Grace.

"It’s important to understand that Maria’s decision is not over-determined," continues Marston. "This is not a story about a girl who’s so desperate and so poor economically that she has to swallow drugs. This is a girl who made a choice to swallow drugs. She wants something else out of life [beyond the promise of money]." Marston also believes that Maria’s desire, "is what allows people to relate to the film on a more universal level. It’s about a 17-year-old girl trying to find her place in the world."

In the film’s stomach-churning centerpiece, Maria has to swallow dozens of latex-coated pellets containing heroin. Marston refuses to give away the pellets’ secret ingredients, saying only that they were "edible." To add to the realism, Catalina Sandino Moreno (who plays Maria) had to swallow a number of pellets in a single take. Marston also swallowed a few pellets. "I wouldn’t ask my actress to do anything I couldn’t do myself," he says.

Maria Full of Grace is an ambiguous title for a film without religious aspirations. But what does the title mean to Marston? "Hopefully, it’s a poetic reference to the fact that this is the story of a girl who is able to find her own grace. Ultimately, Maria’s growth comes from within, literally and figuratively," he says.

Yet finding the right actress to play Maria was a "long struggle," Marston recalls. "You always hope that your character will just walk through the door one day, that it’ll just be automatic. Fortunately, the producers were willing to be patient with me, to the point where we had already postponed the shoot when [Catalina] finally came in. It was immediate."

Colombia, because of media sensationalizing and general ignorance, is a country that many Americans know about primarily because of the drug trade and notorious criminals like Pablo Escobar. It’s not a place many Americans consider visiting. And Maria Full of Grace probably won’t boost its image.

"It’s sort of disappointing that the perception in the United States is that Colombia is a horrific place to live — that no one would ever would want to go there. I understand that, though, because I had that feeling before I visited Colombia for the first time.

"In many respects, it’s a country like any other; daily life goes on," says Marston. "People there find a way to live in an incredibly difficult situation. People in Colombia talk about living in New York City with the same amount of fear as we have when talking about Bogota. Ultimately, what we’re talking about is fear of the unknown."

Audiences in Colombia, however, have welcomed Maria Full of Grace with open arms, impressed that an American filmmaker would take such interest in their daily struggle. Unlike the majority of navel-gazing film school grads, Marston is a young director with a startlingly expansive vision.