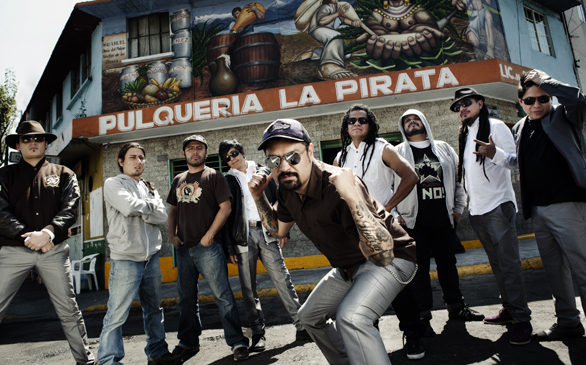 Panteón Rococó has an upcoming tour that will hit Los Angeles and Anaheim.
(Credit: Courtesy of ER:M+M Publicity)

Over the years, Panteón Rococó's musical sounds have garnered a loyal fan base, particularly for their political statement messages in their songs. But the group offers more than that: a lovely, groovy outlook.

"We began 17 years ago," Barajas says directly from Mexico in an exclusive phone interview. "Some of us were friends in school. Little by little, we grew."

"The name of our band is based out on a theatrical play," he explains. "At the time, we thought it was something very funny, but over time, it has grown to be quite significant for us."

For them to play ska is a victory in itself because ska combines elements of Caribbean mento and calypso with American jazz and R&B, which derives from Jamaica.

"This disc carries many different things. Because of that, it is very diverse," Barajas says of Ni Carne Ni Pescado, which took about six months to produce. "In it, there is a portion of covers from music that the band likes. There is also a part that has a tribute to Panteón Rococó that features collaborations. And we have an element of new songs from the group."

"Quiero Bailar Contigo" (I Want to Dance with You) is the first single from the CD. It is an upbeat track that could very well penetrate the charts and make history.

The 10-member ensemble has gotten together yet again for a highly-anticipated summer tour that features 38 shows in six different nations, including the U.S., Mexico, Switzerland, Holland and Germany.

"We have experienced the luck of traveling and performing in Europe, just like in the U.S. For us, it is a dream come true," a very humble Barajas says.

The German population in particular has been very receptive to the band, who will tour there for 18 total shows.

We all know vocalist Dr. Shenka, but we can account the entire group for their past, present, and future success.

"Every year, we have the notion of touring everywhere so that the public can share a good time with us," Barajas says.

To date, they have been playing and makin music for 17 years. A wonderful period it has shown to be, especially when performing in Los Angeles.

"We are happy to come to L.A. to play our music," Barajas says. "Every show is rather fun and exciting."