Morgan Page Reaches New Heights with In The Air 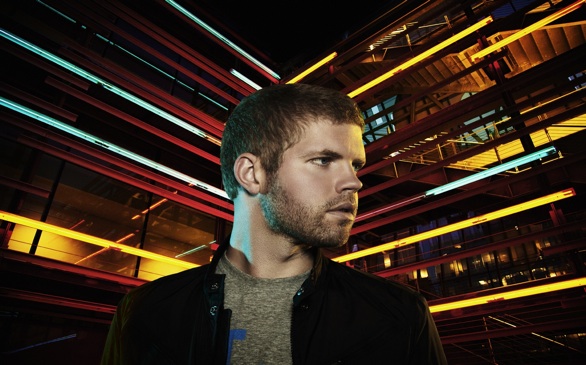 With the recent explosion in popularity of electronic dance music, Morgan Page was rocketed along with this surge, and his insanely catchy “In the Air” nabbed the No. 1 spot on Billboard’s dance music chart.

However, while this is his first No. 1 hit, Page is no newcomer to the genre. Since the age of 14, the Vermont native has been tirelessly creating, producing and remixing tracks, dropping his first album, Cease and Desist, back in 2005.

“It’s a weird feeling,” says Page of achieving this new level of success.

“It’s kind of conflicted. In a way I’m like, ‘Where have you guys been all this time?,’” he jokes. “I’ve been doing this for 15 years. It’s taken me a lot longer than say, someone like Avicii, but honestly, there’s nothing better.”

Page was introduced to electronic music when he was in middle school.

“It first started with just hearing the music on college radio,” he explains. “I couldn’t believe what I was hearing; I didn’t know what this music was.”

Not satisfied with just listening to the music, he soon got involved in the craft.

“I got doing mix shows for a college station when I was in high school,” says Page. “That led to interning for record labels, and it was a natural progression to making music. Then I wanted to play it live to see the reaction.”

He believes that live performances are an integral part of the creative process.

“Touring, you see what see what excites the crowd,” he explains. “There are certain elements that people at a club or festival react to: if the track builds and evolves over time, but also is musically satisfying [with] catchy chord progressions and good melodies.”

Page released the album Elevate in 2008, garnering a Grammy nomination for the Deadmau5 remix of his track “The Longest Road.” He followed up with his 2010 album, Believe, which further expanded his fan base, and earned another Grammy nom the next year for his remix of Nadia Ali’s “Fantasy.”

In the Air, which was released in April of this year, is the culmination of two years of creation and collaboration.

“Typically, how the album process works is I put together an instrumental mix – very basic beats and the chord progression – and then we open it up for people to sing on it to fill up the track entirely,” explains Page.

The new album features a wide array of vocalists and collaborators, with Tegan and Sara bringing their indie appeal to “Body Work” and “Video,” vocalist Jonathan Mendelsohn and DJ Andy Caldwell collaborating on “Where Did You Go?,” and BT, Sultan, Ned Shepard and Angela McCluskey coming together for the title track “In the Air.”

Each song seems to have its own identity and sound; it’s the kind of album you can listen to over and over again, without getting tired of it. From the almost melancholy “S.O.S” to the upbeat “Body Work,” Page showcases his creative range while still ensuring that every track is club-worthy and danceable.

The IDMA-nominated DJ still seems stunned by the success “In the Air” has achieved: In addition to claiming the top spot on the Billboard Hot Dance Airplay chart, it remained in the Top 10 for an astounding 25 weeks, and was also ranked No. 11 on BPM’s “Top 51 of 2011.”

“That song really just blew up bigger than I thought,” he says.

Given the immense success of the track, it’s no surprise that Page has played to almost all sold-out audiences during his current tour. In addition, he was invited to perform at Coachella for the first time, as well as being invited back to Electric Daisy Carnival this year.

“Coachella was awesome, and EDC is always crazy,” says Page of his recent festival experiences.

However, not all the stops on his tour went so smoothly.

“I was playing a show in Albuquerque and the air conditioning broke, and it was so crowded, and it started raining and shorted out all the circuits, so we had no sound for 30 minutes,” says the L.A.-based DJ of his craziest touring experience. “Not a crazy good thing, but that was crazy.”

Page, who describes his sound as “progressive electro,” attributes the recent popularity of electronic dance music to a number of factors.

“Well, I think the music’s really good, first of all, but I think social media really [helped] spread the music,” he explains. “For a long time, there was [an emphasis on the] input of the record labels, and now the record doesn’t have to have a huge marketing budget to be a hit.”

In addition to social media, Page credits the embracing of the genre by college audiences to its rise in popularity.

“College kids had to get into it and get excited about it, and I think that’s the biggest difference,” he says. “I think before, with the other two waves of electronic music, college kids really didn’t get into it that much.”

Despite the fact that electronic dance music’s popularity has come and gone in the past, Page thinks that won’t be the case this time.

Let’s hope his prediction is right, so that Page can continue on the incredible path he is currently taking to reach new levels of success, and keep creating the type of music you can’t help but dance to.

Catch Morgan Page on tour when he performs on Saturday, July 28 at Avalon Hollywood, 1735 Vine St., Los Angeles. Tickets are $25, and are available for purchase at wantickets.com.