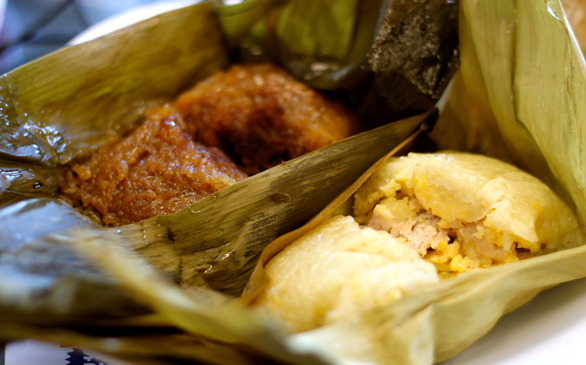 Move aside tamale, there’s a new leaf-wrapped delicacy in town!

Zongzi (zhong-zi) is a traditional Chinese food made of sticky, glutinous rice wrapped in bamboo or reed leaves. In fact, many people tend to call it “the Chinese tamale.” A variety of stuffing can be added to the rice, making it a treat for both sweet-tooths and salty lovers alike.

Zongzi is enjoyed mainly during the Dragon Boat, or Duanwu, Festival, which falls on the fifth day of the fifth month on the lunisolar Chinese calendar. The date varies from year to year, and this year it was held on June 23. Celebrations for this festival typically consist of eating zongzi, drinking wine and racing dragon boats.

While the zongzi may be a new food to you, it has a history that goes as far back as 278 B.C. This was when a famous Chinese poet by the name of Qu Yuan showed a great act of patriotism and committed suicide in the Miluo River on the fifth day of the fifth lunar month. Yuan was a part of the kingdom of Chu, and tried to warn the King of the expansion of their enemy and neighbors, the state of Qin. When Qin took over the capital of Chu, Yuan drowned himself in grief for the kingdom he loved. Yuan was a loved and respected poet, so this was a great loss for the Chinese people. The people searched days in the river for his body, and one legend even says the fishermen raced in boats in search of him. They threw little dumplings of rice wrapped in leaves so the fish wouldn’t eat or attack Yuan’s body. Those little rice dumplings became the zongzi now eaten in Chinese households all over the world in honor of Yuan.

The story of the zongzi is less sentimental than typical holiday stories, but is very
important to the Chinese people. Today, zongzi can actually be found year-round,
but is in most high demand around this time of year in June. Zongzi is sold in most
Chinese supermarkets, and you can pick up some at a 99 Ranch Market nearest you
(99ranch.com).

Most dim sum restaurants also serve zongzi and rumor has it even the Dim Sum Truck
has got some zongzi around this time. (Visit dimsumtruck.com to see when they’ll be
making a stop near you.)

However, the best zongzi is traditionally homemade. The stuffing varies, and can consist
of red bean (for a sweeter taste), Chinese barbeque pork, Chinese sausages, green beans,
chicken, shrimp, chestnuts and so much more. Depending on the type of stuffing you like,
you can do as the Chinese do and make your own zongzi at home by clicking here.