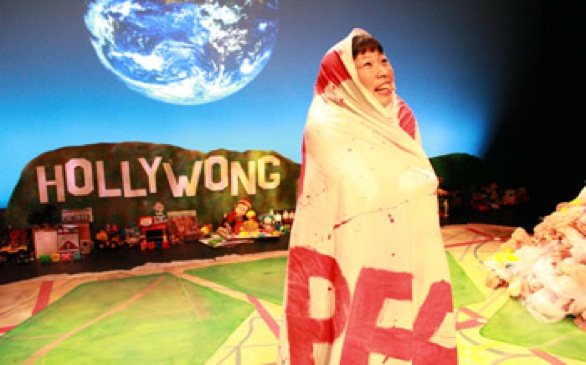 Kristina Wong is bringing her latest eco-comedy to L.A.

The Bootleg Theater welcomes a new work from Kristina Wong, a local performance artist trained at UCLA and honed at the legendary Highways Performance Space.

Wong quickly realized her sense of humor was a little out of the ordinary, considering all the identity politics of her solo work, yet she wasn’t a comedian either. Her monologues seemed to make more sense in a theatrical form than as the “most obscure comedian in a stand up club.”

So although Wong’s newest work, “Going Green the Wong Way,” is first-person storytelling, it is staged more as a full theater production with movement, video and elaborate sets --featuring her signature “HollyWong Hills” sign and a huge pile of plastic bags.

The piece continues to address her interest in social issues without attempting to teach or preach, but to relay a humorous, personal story that tells of the lessons she has learned.

“This is my pain as I address my identity and self-worth in the environmental realm,” explains Wong.

“Going Green” chronicles her life-long journey of trying to be sustainable. Wong was a preteen when she “decided it was my cross to bear.” The story tracks the actress at different ages, trying to do the right thing.

“As an 11-year-old I told my friends to not waste toilet paper; at 17 I worked for the Sierra Club, doing door-to-door canvassing.”

The crux of the story comes when Wong’s vegetable oil-guzzling pink Mercedes exploded and ended up engulfed in flames on the 405. She was forced to face the dilemma of buying a gasoline running car: submit or defy.  She is now content as a public transit commuter and cyclist, and she has incorporated this part of her life into the show, with staging including a complicated floor map and a slide show that attempts to connect the dots of public transit in L.A.

As it has been touring the country, "Going Green" is giving folks a whole new perspective on the challenges those who live in L.A. face in the effort to live an environmentally friendly lifestyle.

Wong isn’t afraid to be critical of the green economy, however, addressing the expense that makes it a “privilege” to go green. Take her recent birthday gift to herself: a $200 indoor composter that made her kitchen wreak with food odors.

The solo performer -- who has been named "one of the seven funniest eco-comedians" by the Mother Nature Network -- counts documentary filmmaker Michael Moore among her influences, who she considers almost a performance artist since he “stages events to interface with cause. He takes action.”

Her latest production is “kind of like an accidental pregnancy. It came up naturally from storytelling with friends.”

"Going Green the Wong Way" will be performed June 28-July 15 at the Bootleg Theater, 2220 Beverly Blvd., Los Angeles. Tickets are $15, and are available at the door or online at bootlegtheater.org.