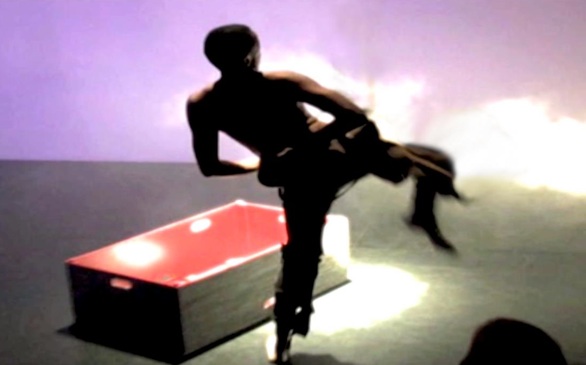 Outlaw will perfrom "Porphyria's Descent," an excerpt from his "The Late, Late Show."
(Credit: facebook.com)

As one of this year's City of Los Angeles Individual Artist Fellowship recipients, L.A.-based performance artist Paul Outlaw has spent the past few months creating a new section of his signature work, "The Late, Late Show," a long-form "solo" piece --the word solo is in quotation marks because Outlaw actually works with a long list of artists in a collaborative process.

The piece is “about race, sex, violence and American history," says Outlaw. "Doesn't get any dirtier than that.”

"The Late, Late Show" is a multi-part "supernatural musical" beginning in the pre-Emancipation South ("Porphyrion's Revenge"), continuing in the 1950s ("Porphyrion in Love"), and concluding with "Porphyria’s Descent," in which a 300-year-old androgynous African American vampire performs a hip-hop electronica concert in 22nd century Los Angeles, which will be presented as part of Grand Performances Summer Series this Friday night.

Two other COLA fellowship recipients will also be presenting excerpts from their new work that evening: Joseph Mattson will read from his novel, Hexico, a contemporary re-imagining of the West, as if the cession of 1848 never happened, and features a transgendered heroine carrying a chupacabra’s baby; and in a selection from "Home of the 5 & Dime," Raphael Xavier deconstructs songs, rap lyrics and break dancing on a journey through the life of a hip-hop practitioner.