Dodgers Lose Lead but not Faith 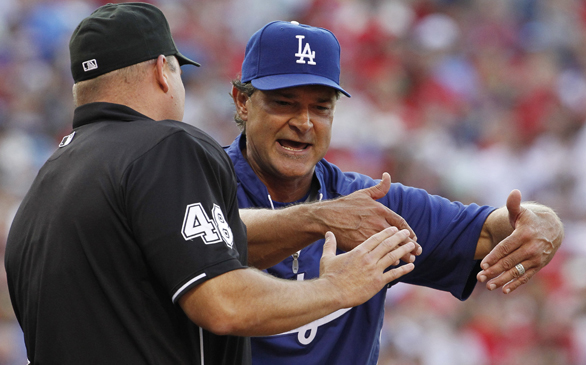 With Thursday night’s 3-2 loss to the New York Mets, the Dodgers officially moved out of first place for the first time this season. Having lost nine out of their last 10 games, they perfectly inverse the fabulous 9-1 record in which they began the season.

Barely a week ago, the Dodgers had a four game lead over the San Francisco Giants, who surpassed them after last night’s game. What’s the matter? In short, the offense –or rather, the lack of offense. With Andre Ethier’s strain to his side during Wednesday’s game against the Giants, the lineup was left without any significant power threat. (The report on Ethier is that he will sit out for a couple of days but not go on the DL.)

In the meantime, the Dodgers’ starting lineup looks to be in stiff competition for the offensively most pitiful in baseball. On Thursday, the highest batting average belonged to backup catcher Matt Treanor at .265, and the big slugger was Juan Rivera, with his mighty three homeruns. The fact that they scored any runs at all should be celebrated. When Dee Gordon and Elian Herrera touched homebase in the fourth inning on Thursday, it was the first time any Dodger had in 33 innings. It was the sixth longest stretch without scoring in franchise history.

When asked about the recent sorry results, manager Don Mattingly looked to the future: “We’ve got to band together, play our best baseball, find a way to win a game and get our guys back.”

The “guys” he is referring to are Matt Kemp, Andre Ethier and Mark Ellis.

As Mattingly explains, “They are the guys that carry your load. They are the ones who set the tone for your lineup, and the other guys fill in around them.”

As the Dodgers have watched their lead vanish and become a memory, the most mysterious thing of all may just be the continued confidence of their manager: “I still come to the ballpark optimistic.”